Only really got two days in the garage as various other chores and looking after the wife intervened, but in that two days got a lot of the front end completed.

So somehow I managed to screw up the width of the front end which had me pretty worried for a while. Visions of having to do major surgery on the chassis were floating in front of me, but after some thought I realized it wasn't a problem, and could be a benefit.

Instead of the main front cross bar being 21.4" mine is 23". Don't ask me why. It just is. This makes the base chassis 0.7" wider on each side at the front but the extra width reduces as you go to the next cross bar which is the right width.

This has forced some slightly different thinking on the vertical bars, but the plus side was that I didn't have to deal with the "Bitch Tubes"!

First off I measured the angle of the lower and upper suspension points which was 66' and figured that I should make the vertical match that so that the distance between the vertical and the suspension pivot point consistent. I then took a 45' downward line from the top of the chassis tube. This gave me this: 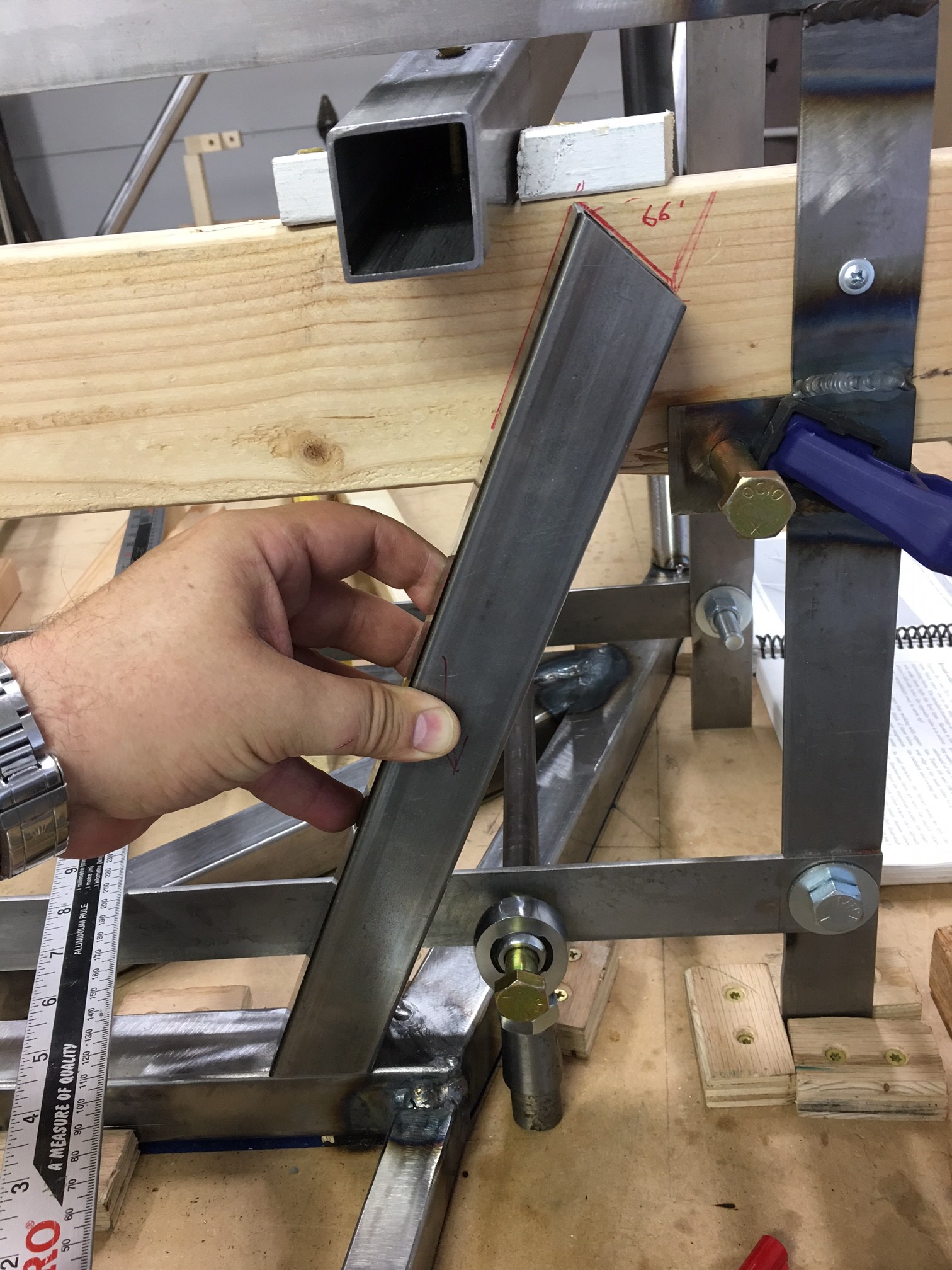 Then we applied a little CAR (Cardboard Aided Design) to come up with some plates to attach the vertical to the top chassis tube like so: 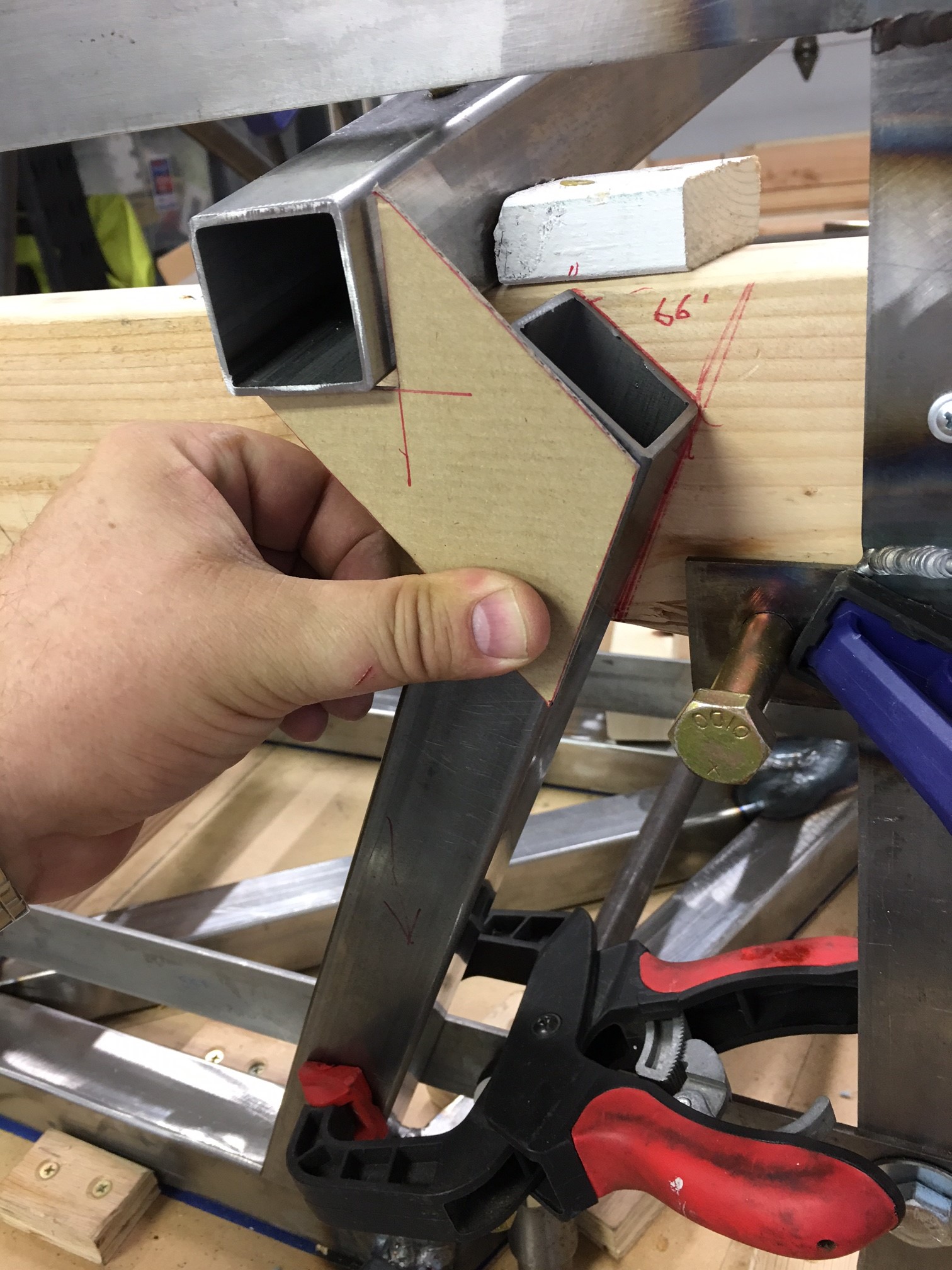 These were then transferred to some 3/16" plate to give it some extra heft: 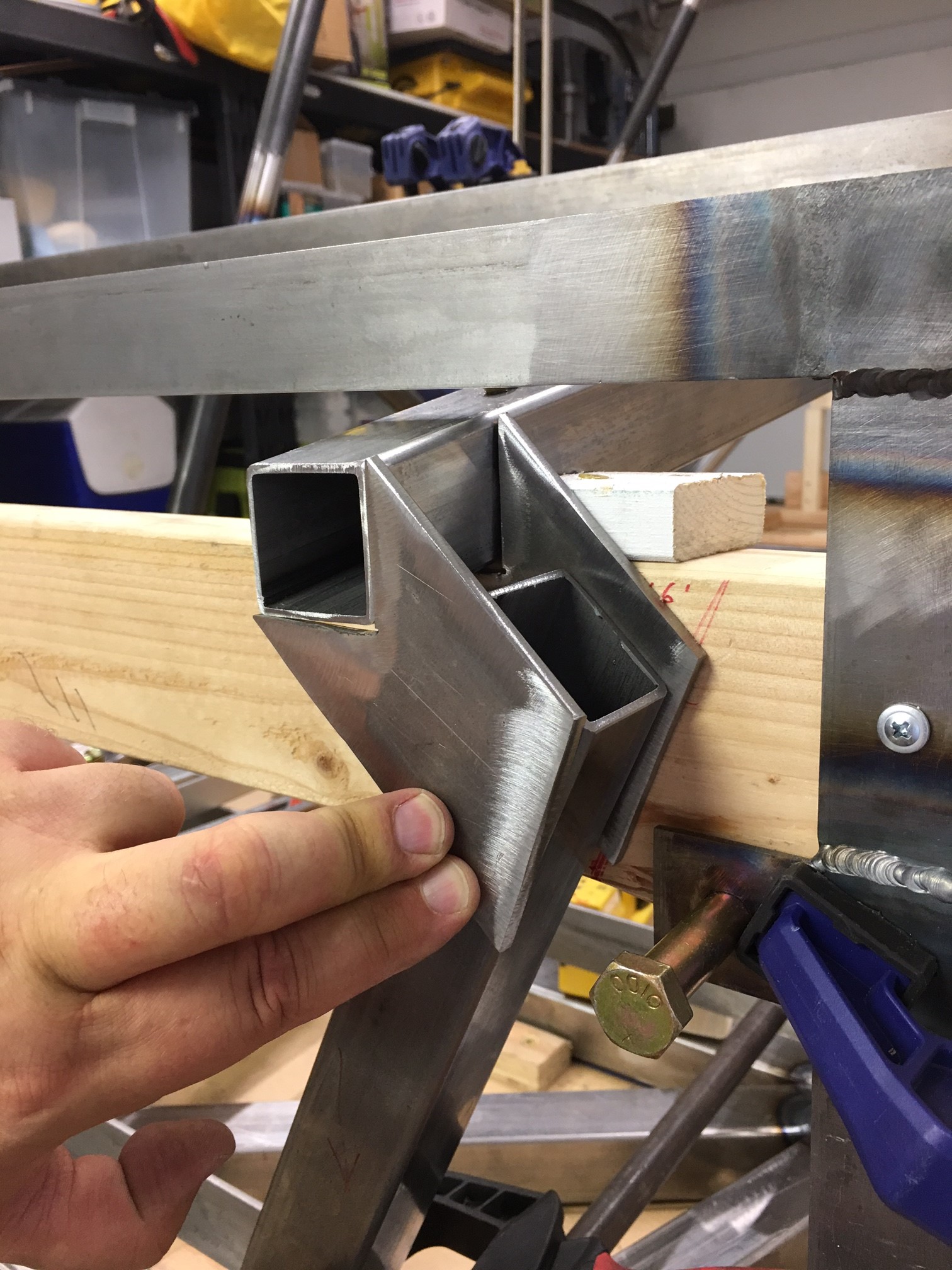 Then a final fit up just to make sure: 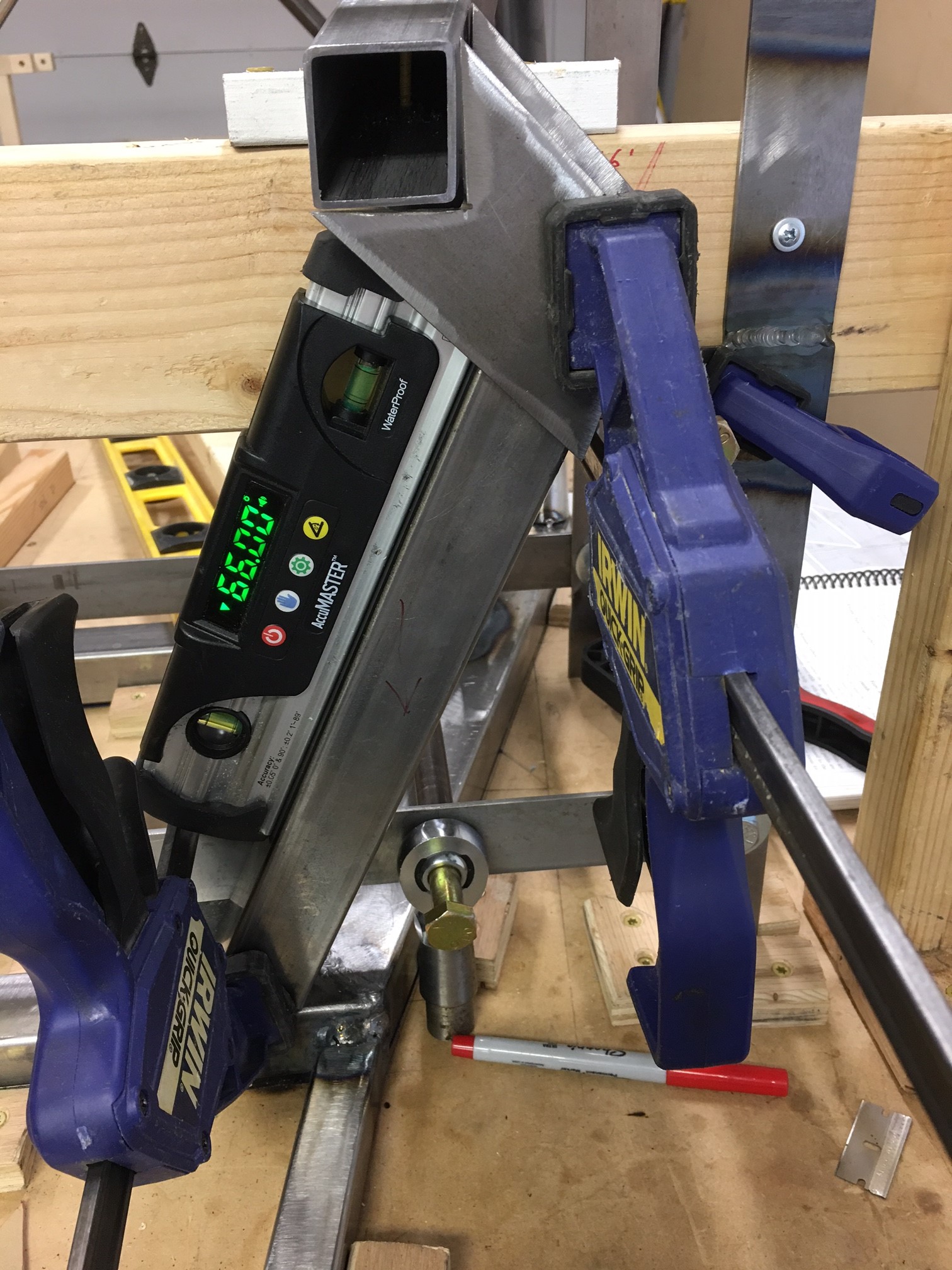 It was clear that these were going to need to be fully welded off the car resulting in something that looked like: 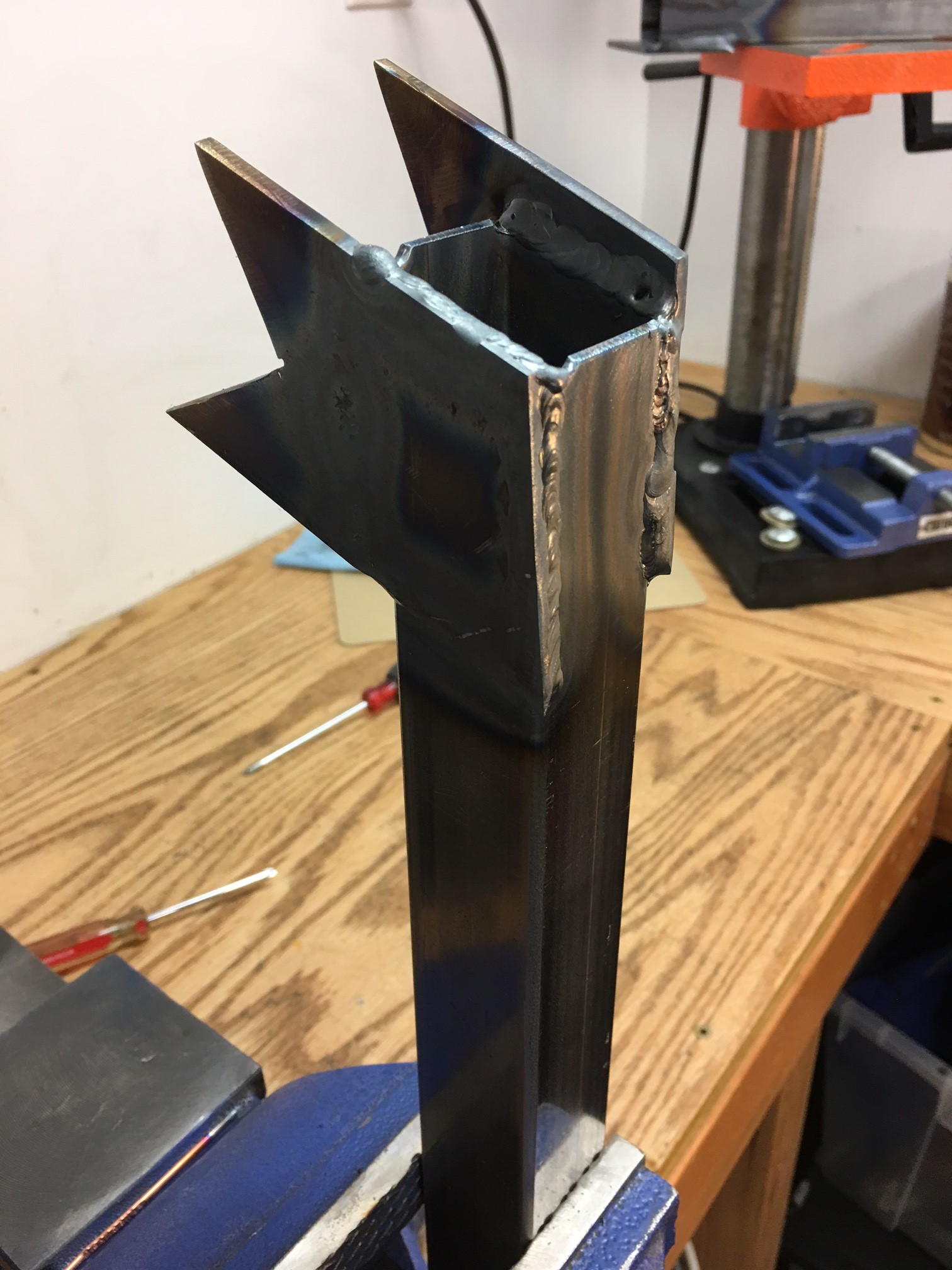 Then to trial fit these in place and tack them in 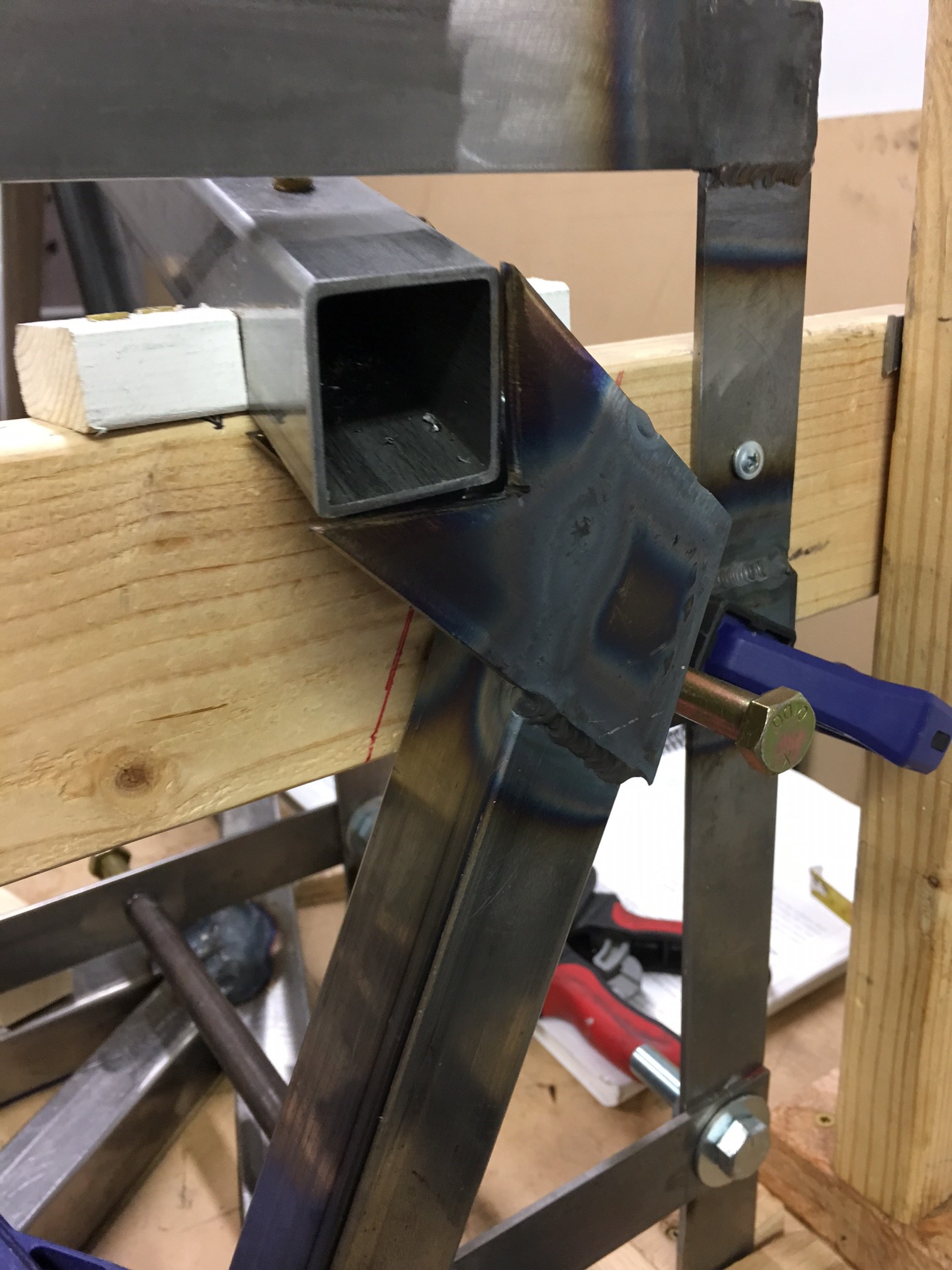 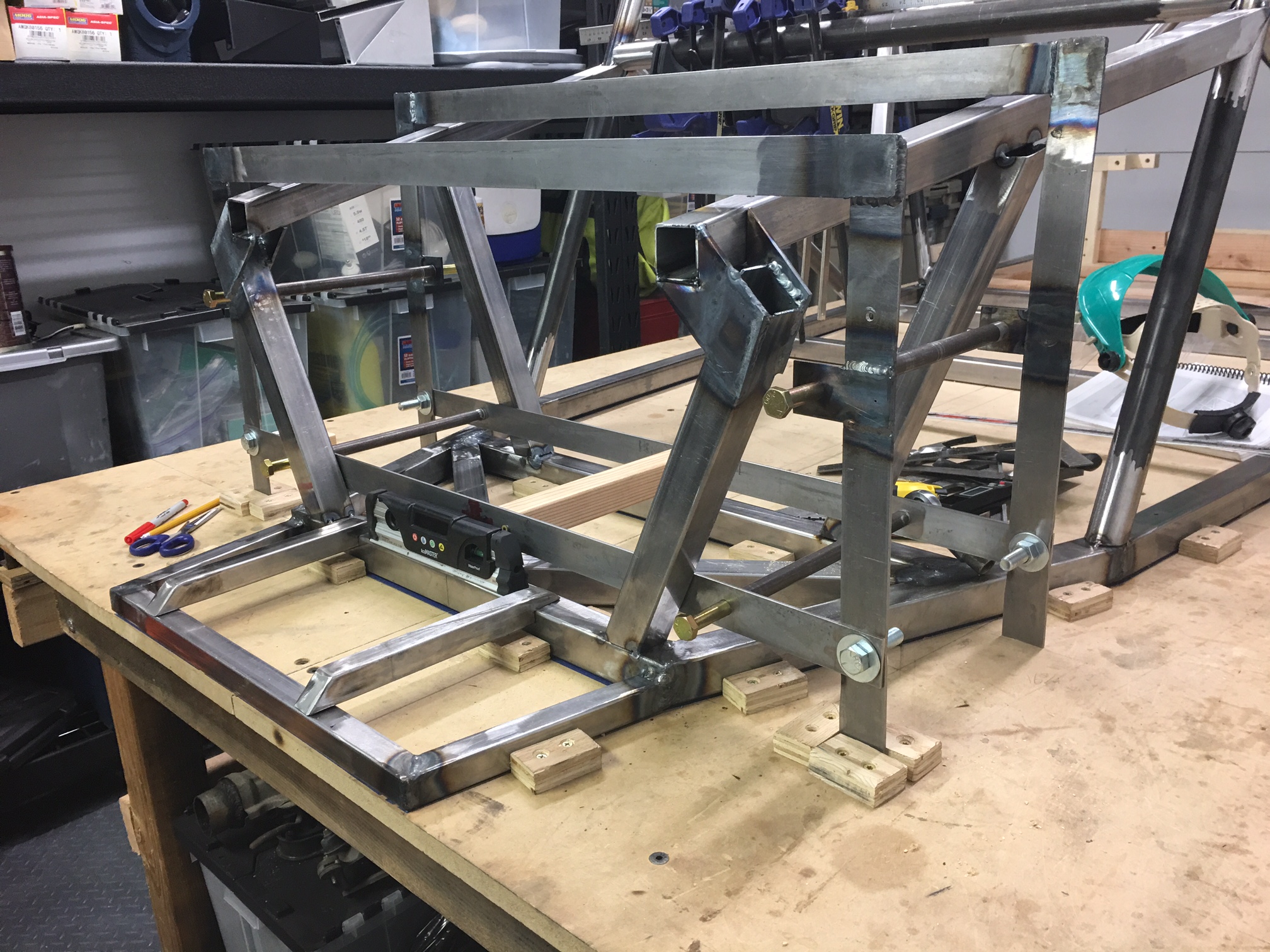 Then moved on to the rest of the front including the extra cross bars for the pushrod suspension. I'm quite happy with the results! The fits pretty good and everything seems to be in the right place and aligned. 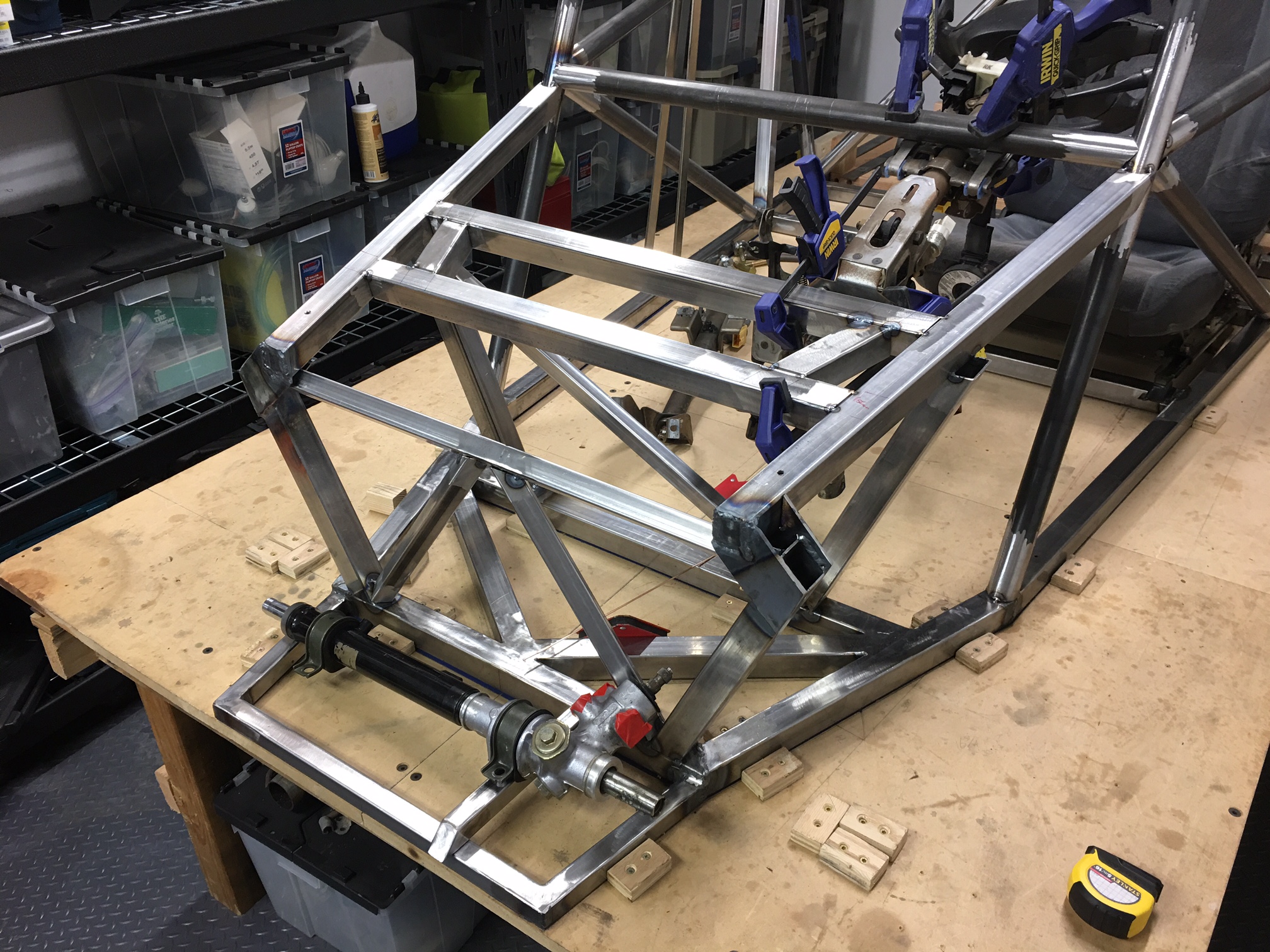 Lastly started on positioning the steering rack supports. Grabbed the steering rack and just for kicks grabbed the column, steering wheel and seat as well to get a first very rough taste of how it will feel in the car and whether I have any size issues, being a big boy!

I was VERY surprised. Even with things just roughly thrown and clamped down the driving position is excellent! Plenty of room both width and in the foot well, even with the big chunky Honda pedals. Only thing I would change would be to have the steering wheel 2 or 3" closer, but other than that it really is pretty much spot on! Just enough headroom for a helmet under the roll hoop too!

Of course, at this point, "Vroom, vroom!" noises were mandatory...

That white T shirt is suspiciously clean if you ask me.......

Progress looking good Steve. Those Bitch Plates look like an easy solution to that junction.
Top

Ha! You haven't seen the other nine...

Eventually I'll box those junctions in to keep them sealed up.
Top

Been a quiet couple of weeks on the car front ... when the missus says "let's decorate the bedroom!", and your retired, and you're the only one with two functioning arms then this becomes "Why don't you redecorate the bedroom?", which led to gutting the entire thing down to the trim, painting all round, new floor, new trim, new hardware. As usual with these things, took longer than projected.

However got back to things this weekend so time for an update. Let's start at the end...

...end of the car that is. Time for the rear subframe!

I think I've said it before, but one of the realizations I've come to over time is that building a metal car requires a lot of woodwork.....

It's the realization that if you want to build anything out of metal you need a jig, and jigs are easiest in wood. Have to say it's all forced some improvement of my woodworking skills.

So this weekend consisted of, building the jig: 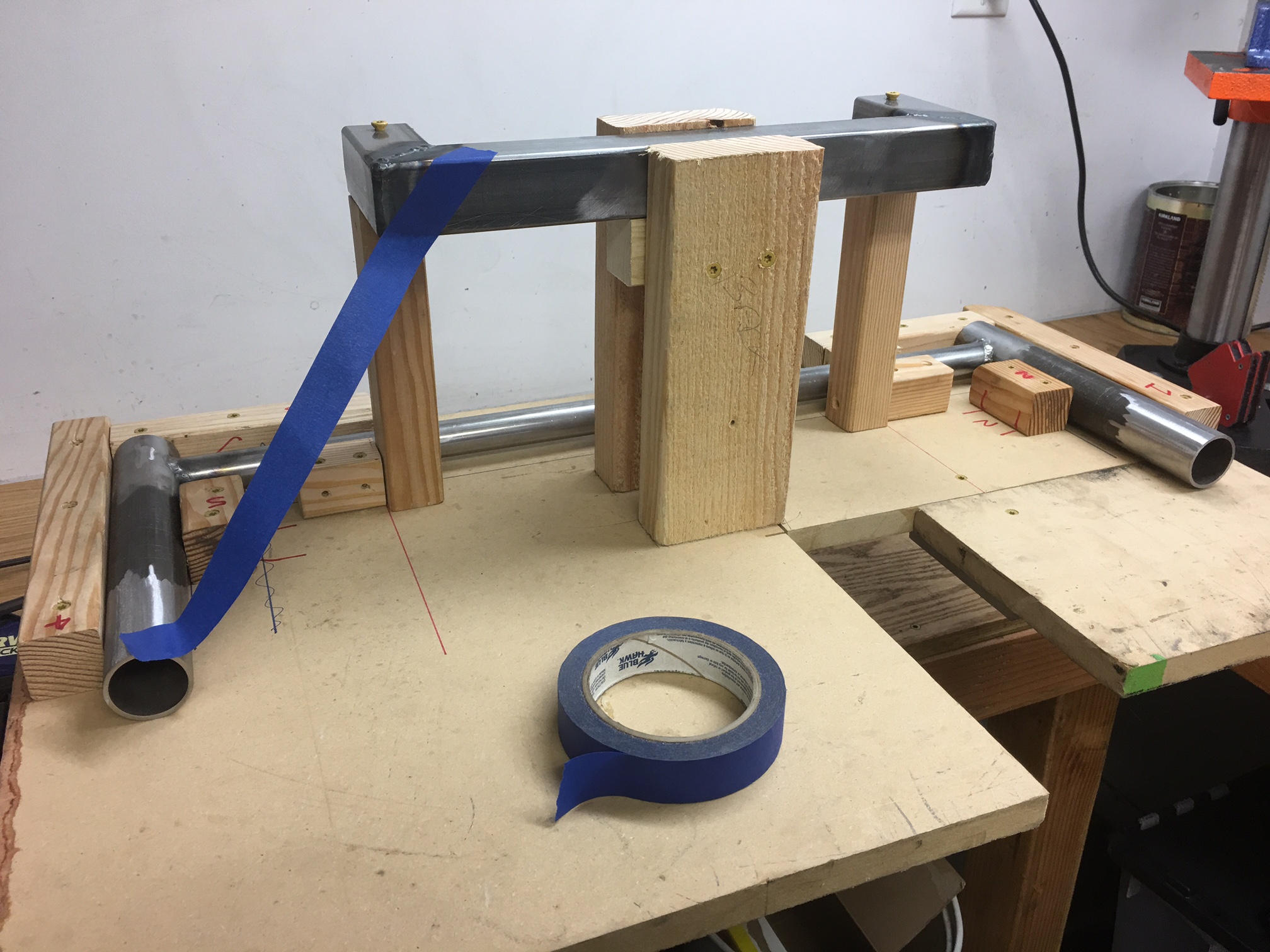 Cutting and shaping the metal to fit the jig - those tubes that connected the top and bottom of the subframe were darn fiddly: 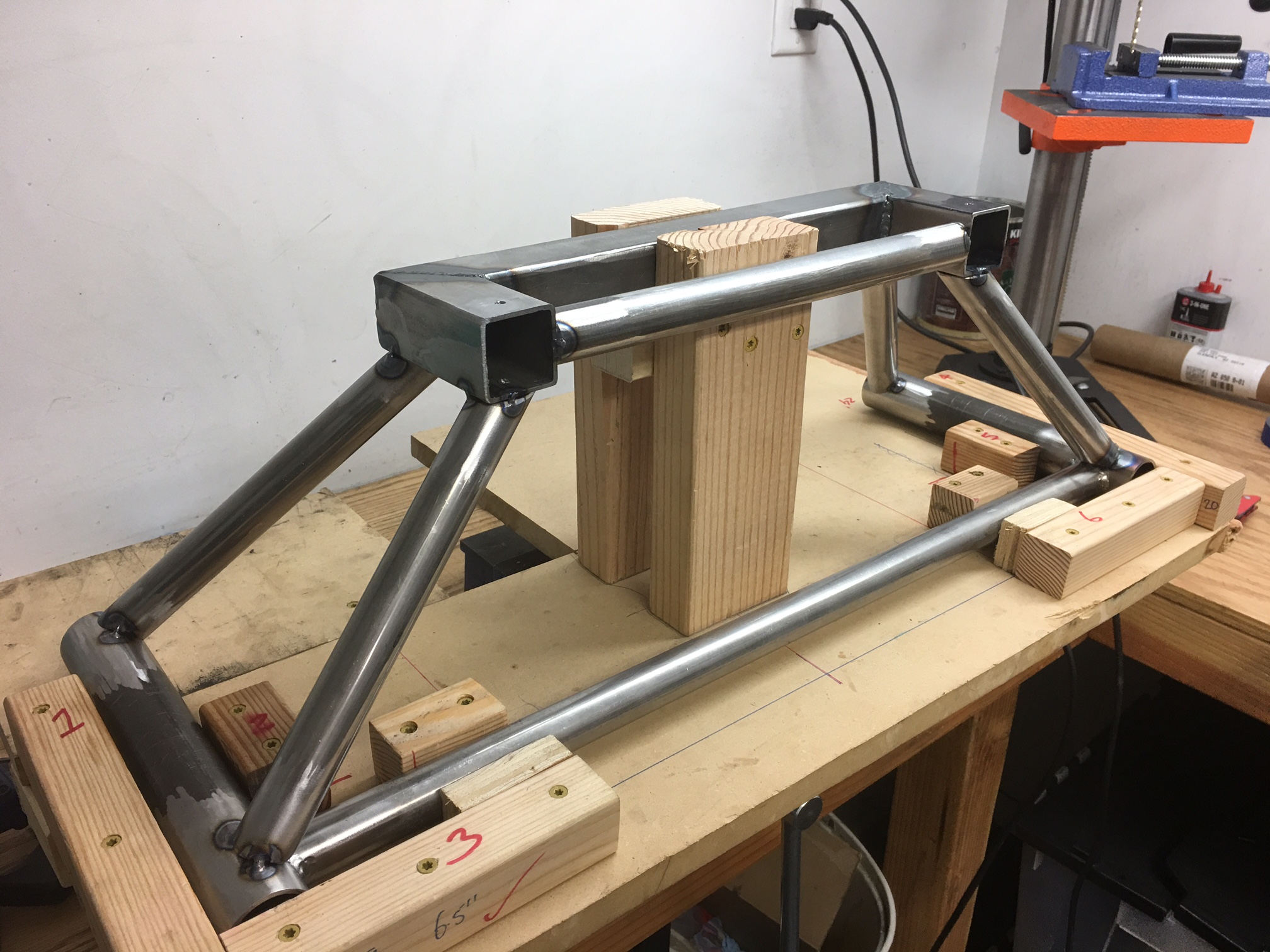 And gluing it alll together with some metal glue: 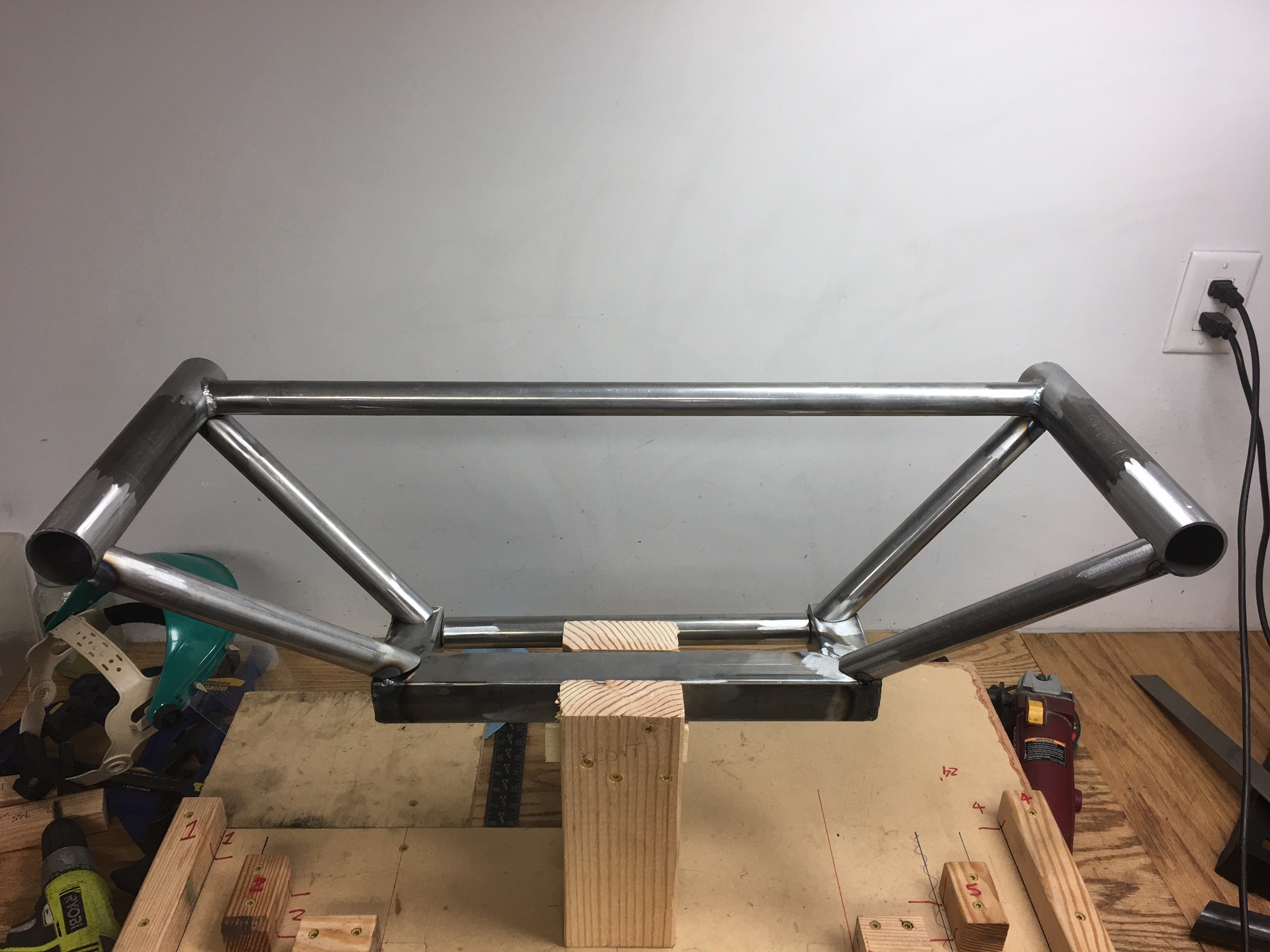 Held it up to the rear chassis jig sitting in the car and it's a very nice fit indeed. Scared myself stupid (we're talking all the body heat dropping out!) when I held it up the first time and it was miles off. Helps when you hold it the right way round!

Got basically the whole of the next three weeks so some good progress should be made. I got a week to the garage as a "good boy" for the bedroom redecorating, then she's off on her travels for two more weeks. We'll see how my stamina works out....
Top

That's a beautiful jig, and a fantastic piece of work for your car. Keep up the good work!
Top

Let's start today's post with a couple of neo-philosophical questions:

1) Is it possible to get addicted to acetone?
2) How long does it take to learn that those really nice Irwin clamps with the plastic grips are not suitable for holding steel in place while you weld?

Started off today feeling somewhat 'meh'. Sometimes it's just hard to get into gear, however, as all Brits know, once afternoon tea was taken we rocketed ahead.

Again, preposterous amounts of woodwork for the "jig" for the rear. I must be getting better at making angle joints in tube as I got all 8 joints right first time, without having to have multiple goes at it. Resulted in some nice fitting joints for a change!

Obviously given the "bigger midriff" of my car due to the cage widening, I have given myself some interesting challenges in the future. I was re-reading last night an noted Kurt's warning to ensure 304 and 305 were directly above the lower bars to give yourself a nice flat place to hang the rear wheel arches!

Well I like a challenge in life, and now instead of a single flat plane I have a plane that bends in three directions. I laugh at adversity! I pour scorn on hard times! I thumb my nose at mildly inconvenient things. Ah well. I figure having a car I can fit into is more important than making life easy. 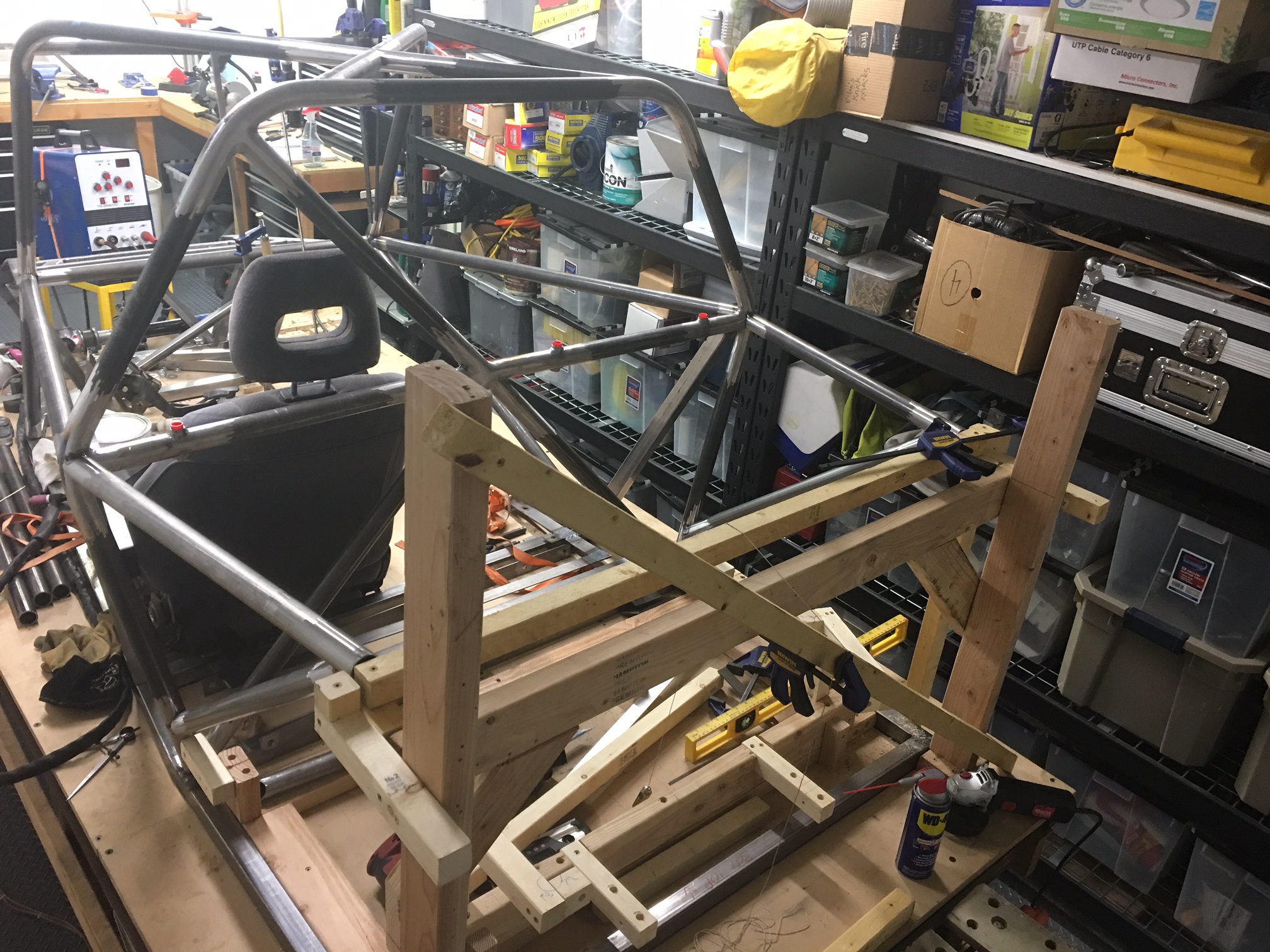 That's fine, I did something similar with the forward ends of the side panels. Just make sure... well, hope at this point, that it's being bent in three degrees of freedom or less, else you'll get need an English wheel to go along with your tea!
Top

So it's been a frustrating few days, mainly to my ignorance and/or stupidity...

Got some good progress and some nice fits doing the upper rear bars. Again a wooden jig was built to hold everything in place. I know I do this a lot now but I'm finding it so much easier and my resulting work far more accurate. However, there can be penalties ... see later. 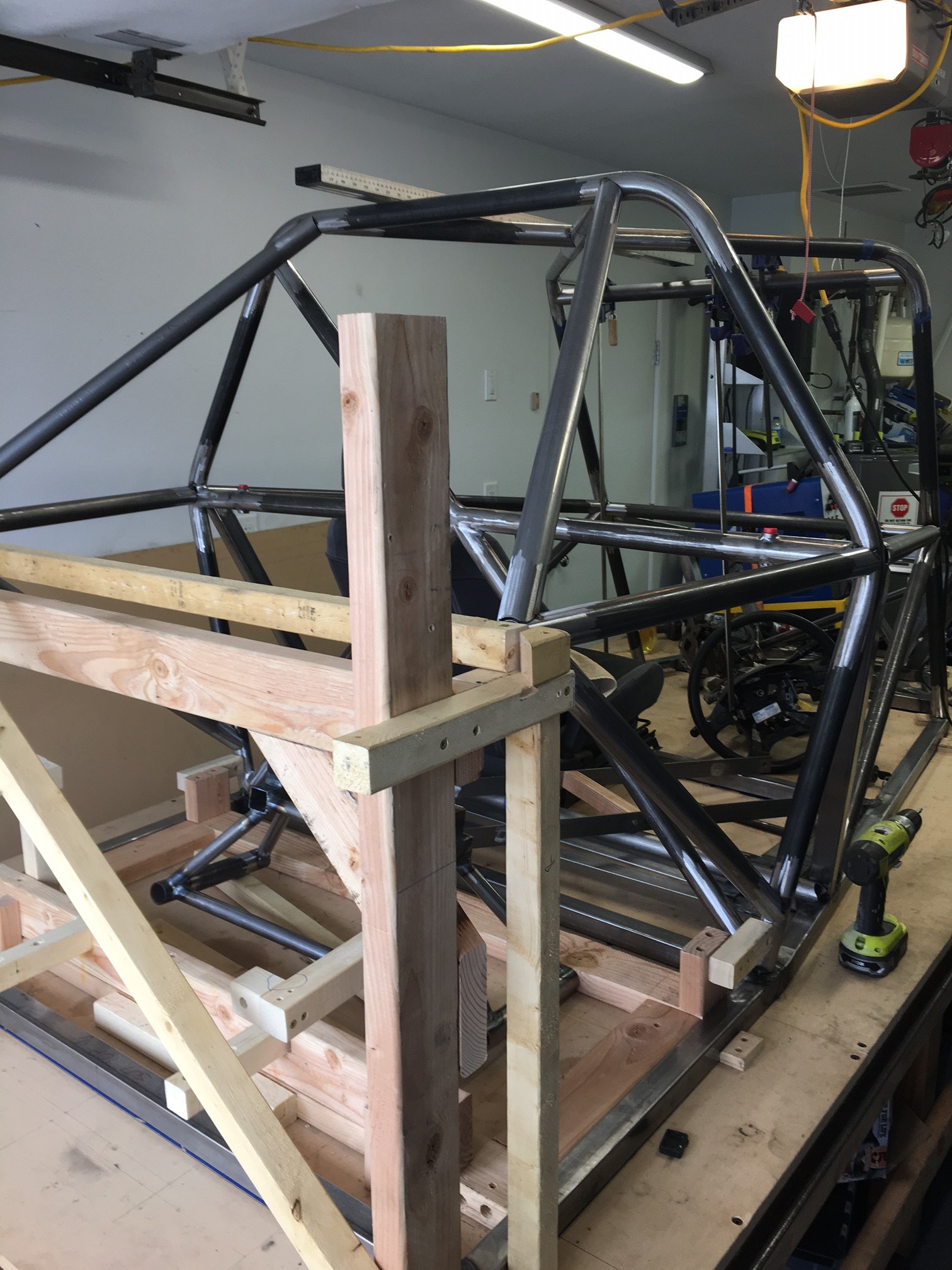 Very happy with that! Everything worked first time! 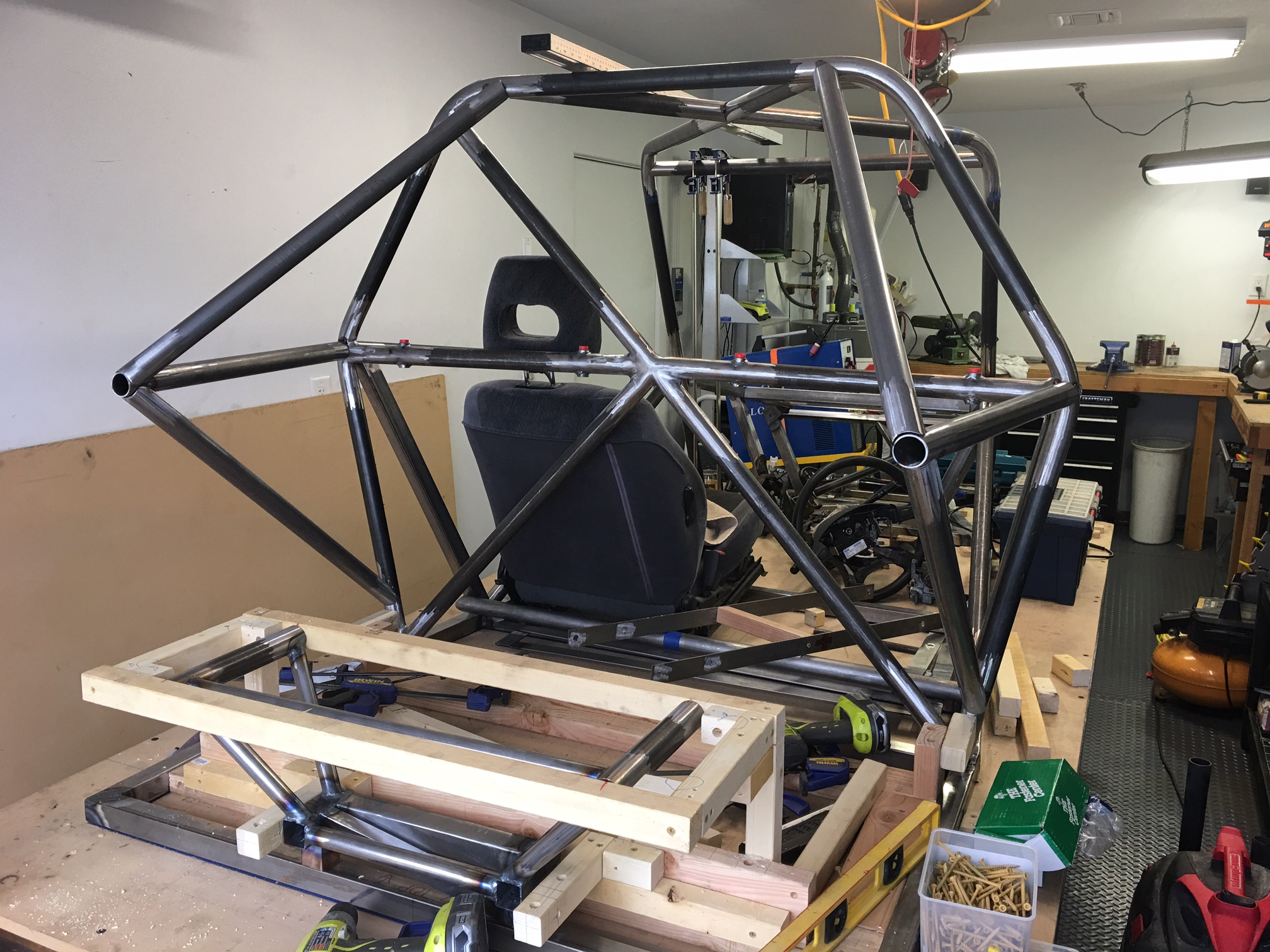 So now to start looking at how to join the rear sub-frame to these lovely new bars. First I added a couple more bits to the sub-frame jig to hold it securely in place: 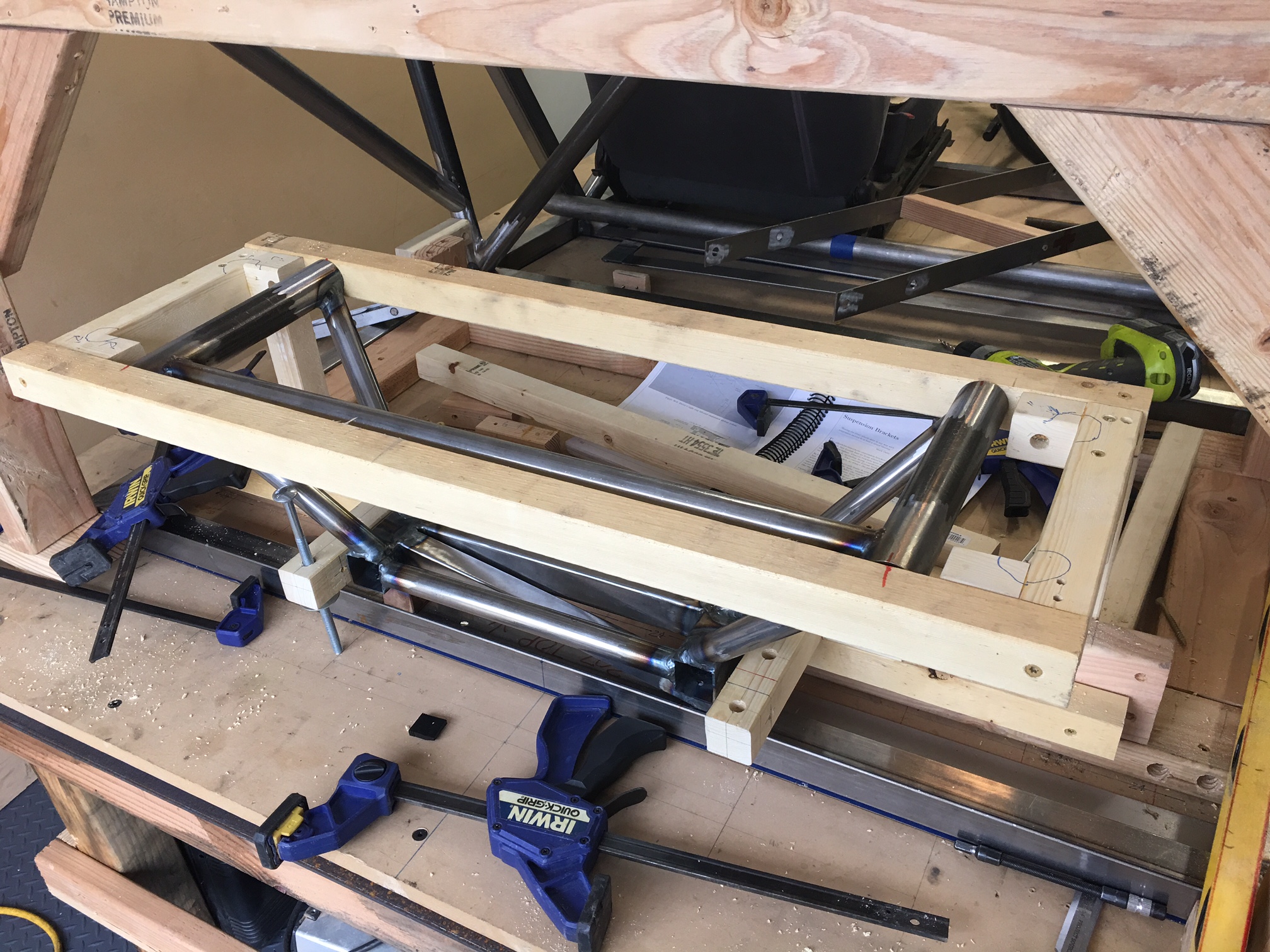 Now the highly observant of you will notice that there's an error in the jig. The placements for the lower suspension supports are 1.5" too far back. This is because previously it was that the uppers were 1.5" too far forward, which I corrected, and assumed the lowers were wrong too so I moved them back.

This led to a long line of irritating little pissy problems before I identified what I had done wrong.

First off I made the suspension brackets, "swept back" to fit the jig. Very nice they were too! Did them in 3/16" as suggested, got some washers, started welding them on, only to suddenly realize they were zinc plated rather than stainless. Oh crap! So stopped that, removed the one I had done, and ordered some stainless ones.

At this point I noticed that the rear placements were in the wrong place, so moved them and started over on the lower brackets. Ho-hum!

New brackets, new washers, let's try this again. OK! Got the lower mounts done and the bolts fit beautifully (which retrospectively is surprising - I was lucky!). 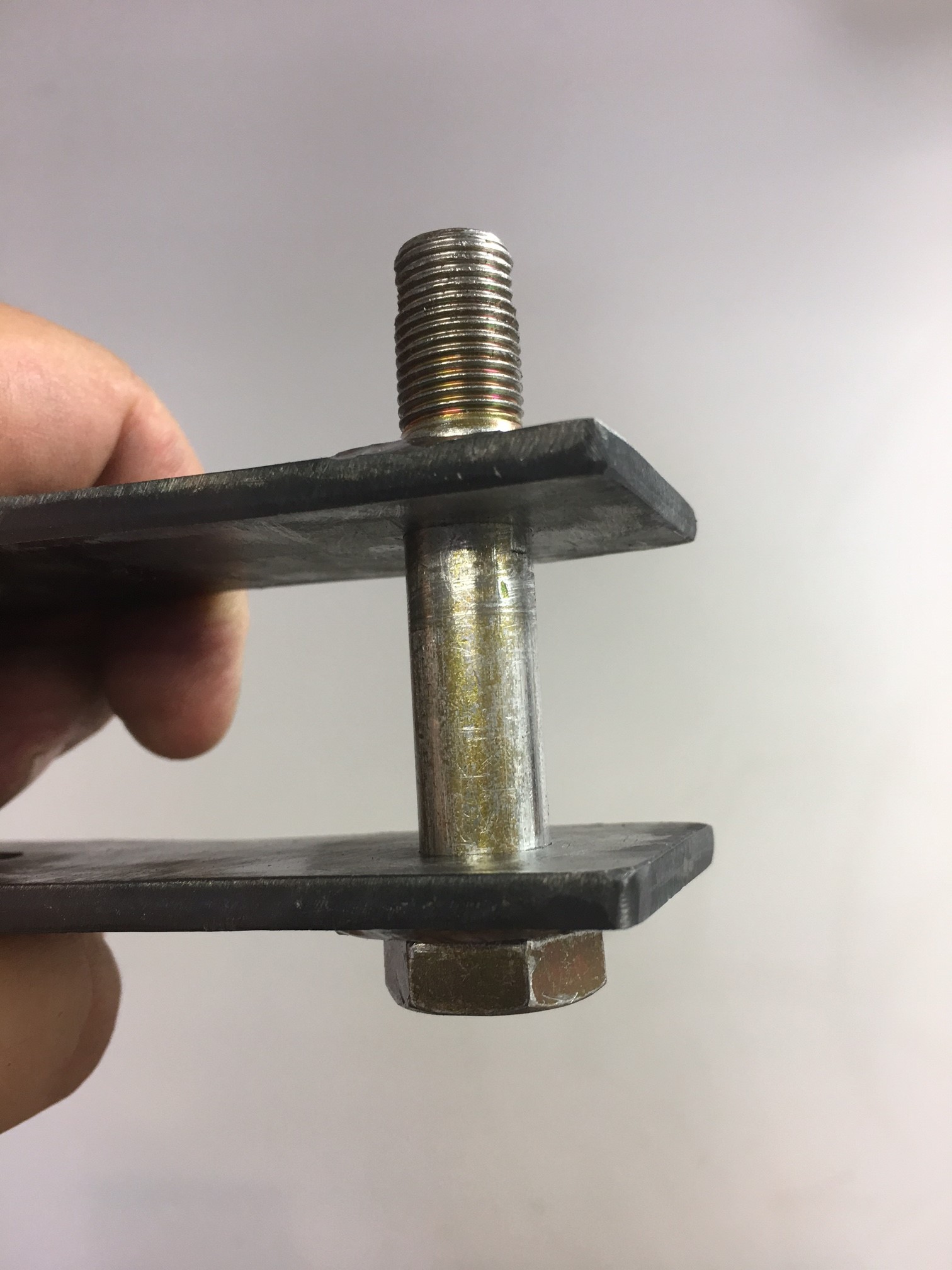 So tacked that on and very happy. Now lets try one of the front mounts!

Drilled the holes and placed the washer... 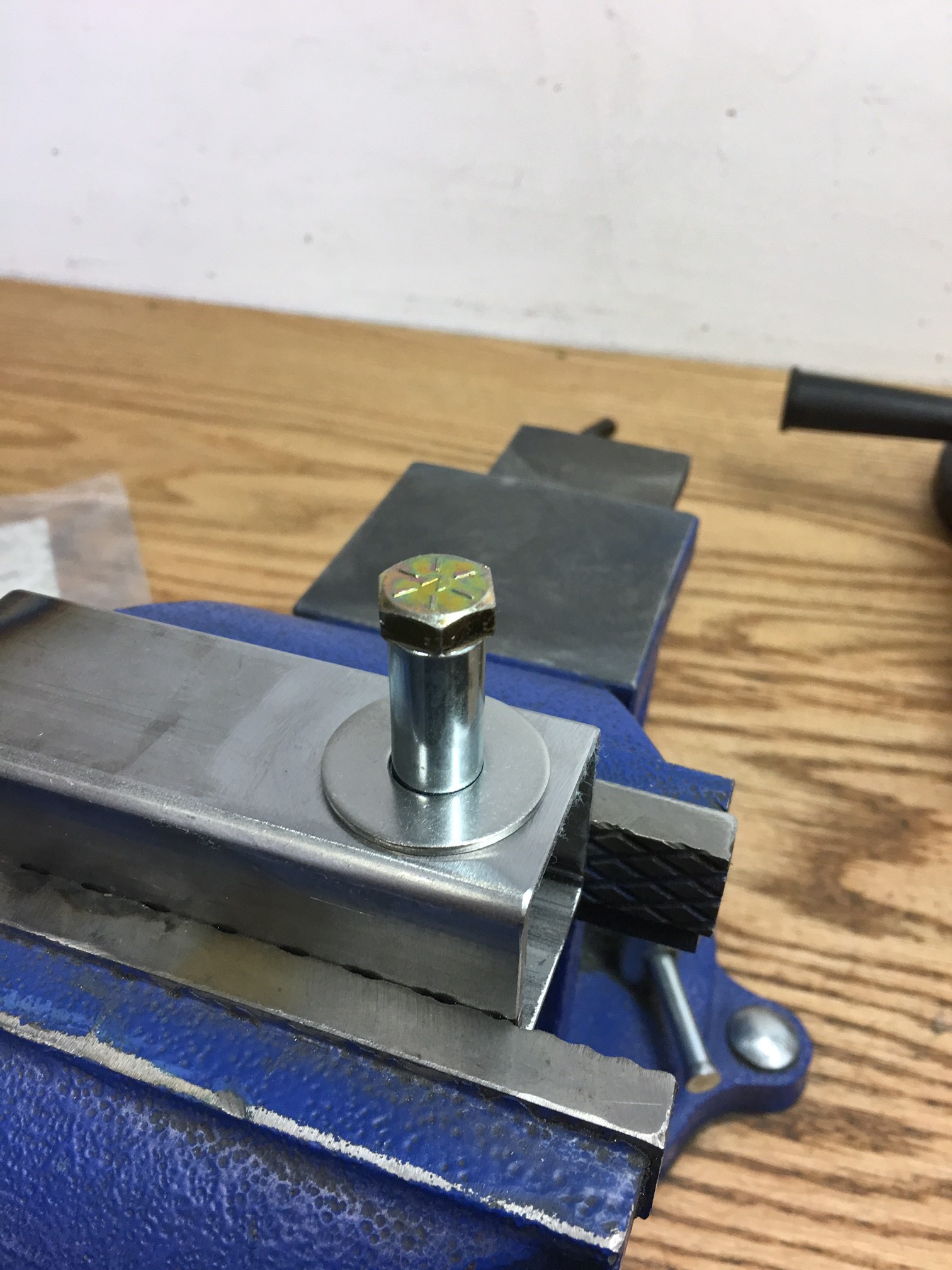 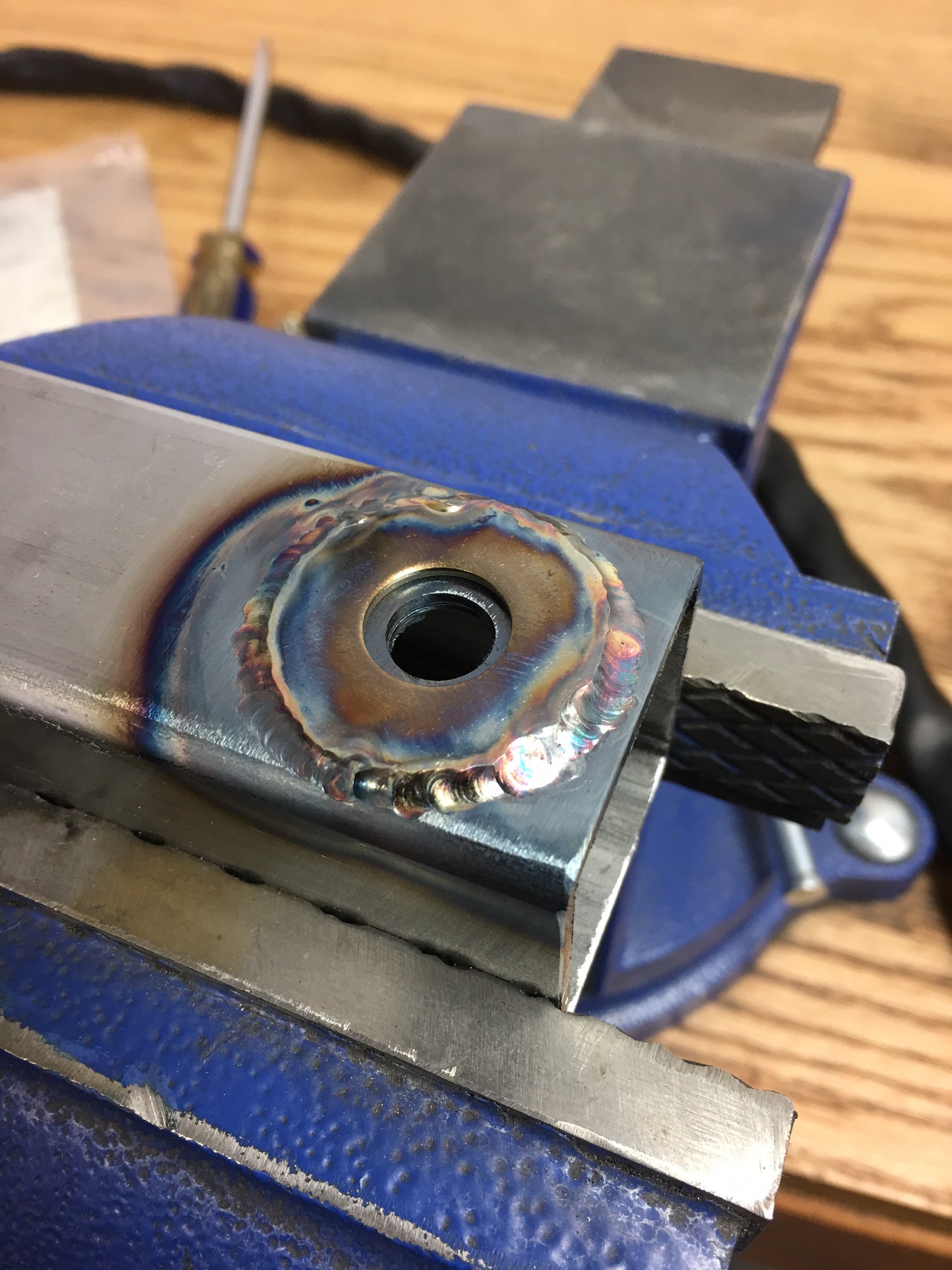 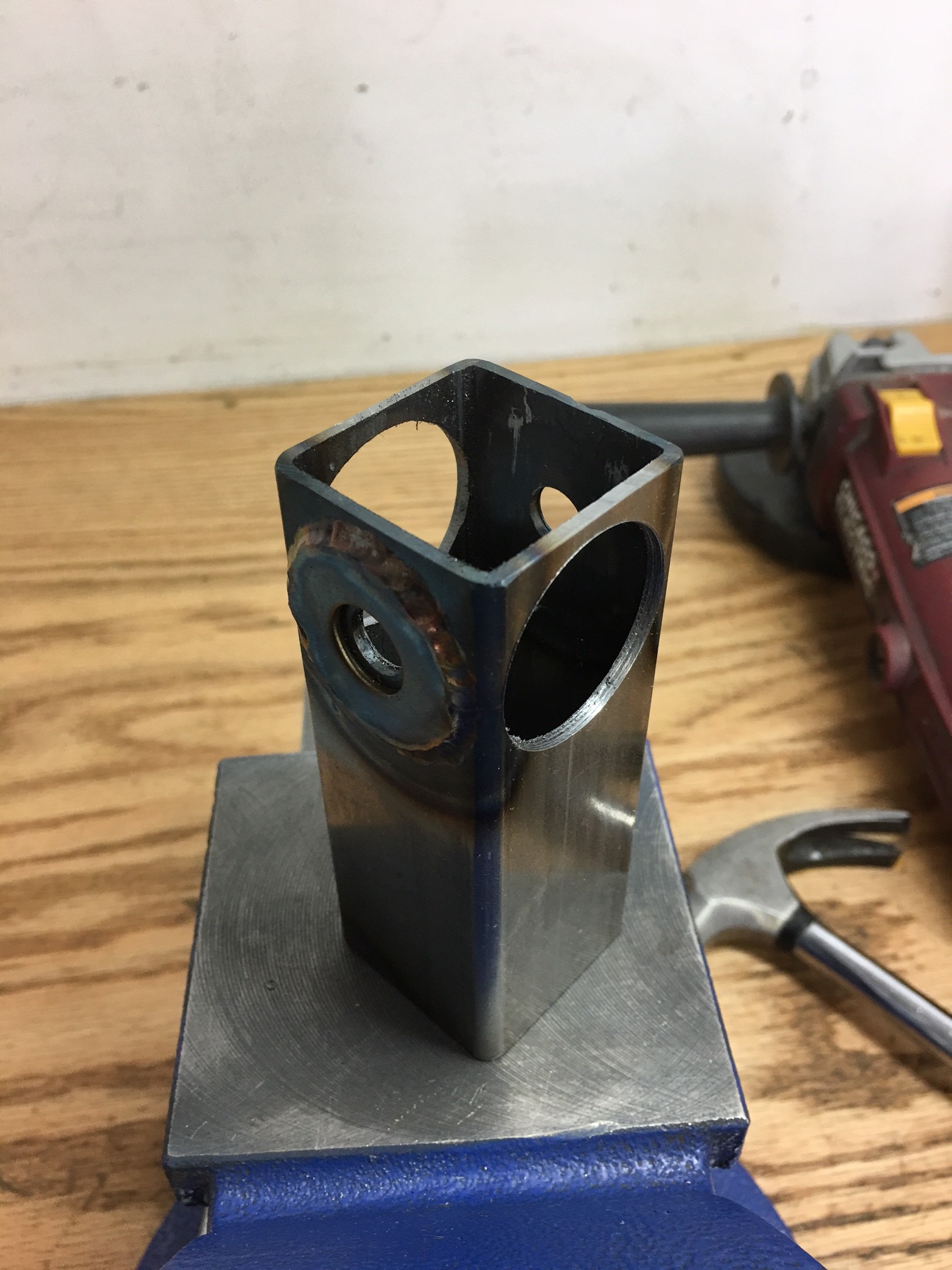 And the finished article! 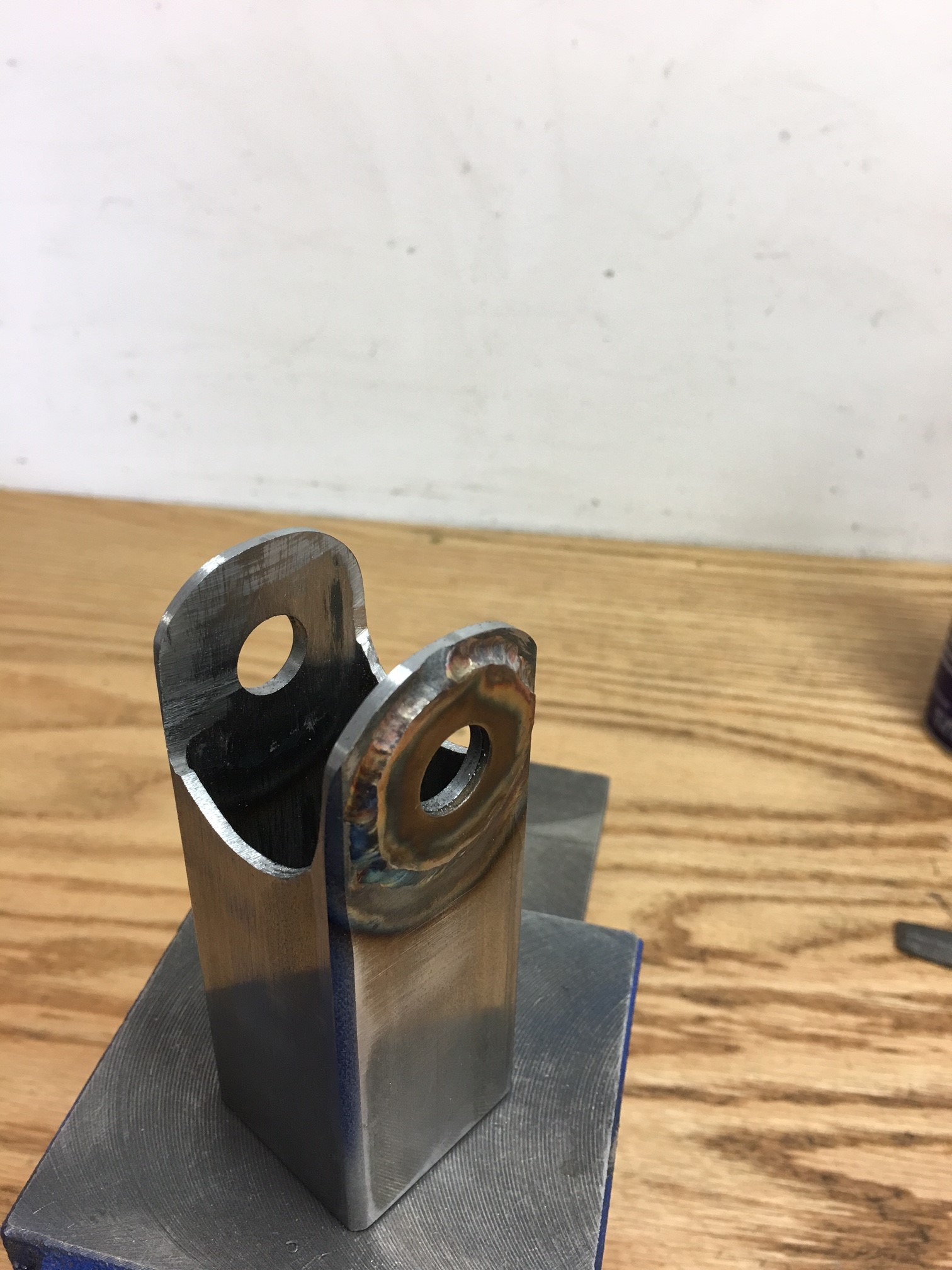 That would be the bolt dropping straight out as it's as loose as a hooker's underwear elastic!

Yeah. Obviously I am ignorant of the fact that washers that meet the ASTM standards have what seems to me a strange numbering convention. A 7/16" washer has an internal diameter of 0.513", so the reamer never actually touched the washer, and because the washers and reamed holes are ever so slightly misaligned, the hole is elongated hence why it can't hold the bolt. You can see that the edge of the washer here hasn't been touched:

Bugger! So my $45 of 7/16" washers from Grainger are not use (at least for this purpose, but I'll use them when fitting the bolts in).

So back online, order the right ones.

So it's been lot's of irritating little misses or not checking properly that basically have had me do everything twice or more this week.

Other than that the bracket looks great, so we'll get these all cut and drilled ready for the new washers when they get here Wednesday.

The joys of building your own car!
Top

As an alternative method, I reamed the holes in the bracket and the washers before welding them, held the assembly together for tacking with an accurate bolt then passed the reamer through the assembly once the whole thing was complete. Seemed to work OK on the whole.

Not before I'd messed up a few doing it other ways though!

Loving all that jig work though.
Top

steveo wrote:...The joys of building your own car!

I caught myself thinking that as I struggled to get the engine out the last time.

The advantage of building a car in the garage is that at any time, you can put down the tool you were about to throw across the room and go take a nap. Ignore the car for an hour, a day, or a month, it makes little or no difference to your life. Now imagine doing a kitchen remodel, where it absolutely has to get done and everyday it takes is another day of disruption. So that's what I remind myself when I get annoyed. Yet another way to think of it is "If that's the biggest problem in your life, you're doing well!"
Top
Post Reply
224 posts