Only the tapered ball part moves. He hasn't yet installed a cross piece to support the threaded piece you see sticking out the rear of the part.
Top

Episode 23 ... in which our brave hero gets a lesson in humility...

It was all going so well this week...

I could see maybe getting the whole front end together and wheels on by the end of the weekend. It was a mirage

Before we start, here's how far off that "M16" rod-end from Moog was: 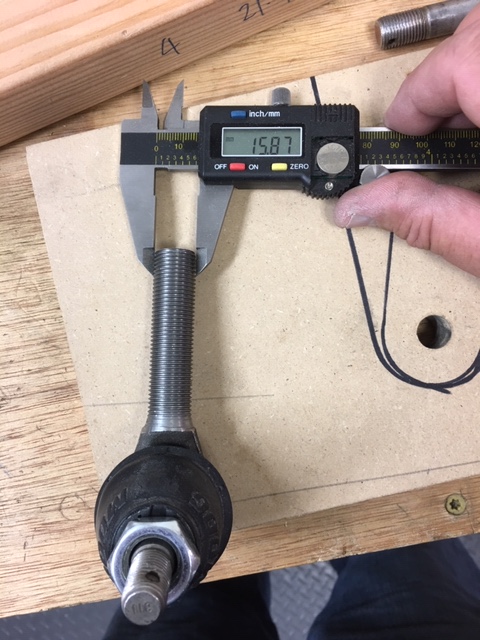 The week started well. Started with building up the rockers as the brass plug to weld the cups in had arrived. 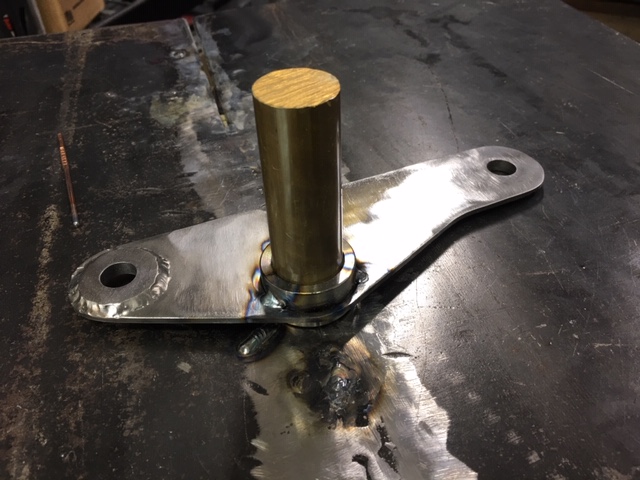 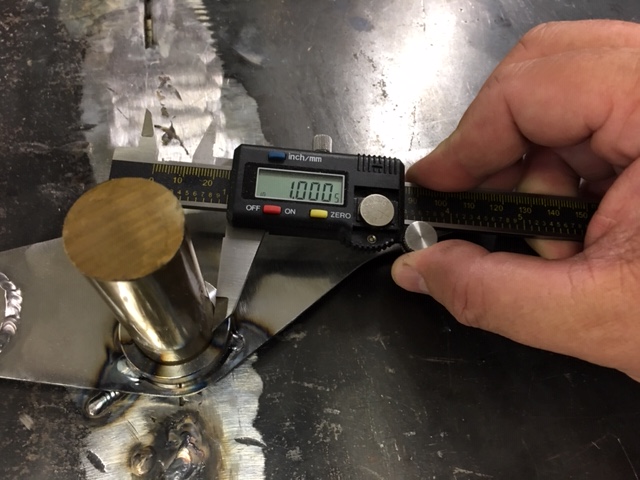 Have to say that's some close-tolerance manufacturing there! Started welding all the pieces together. 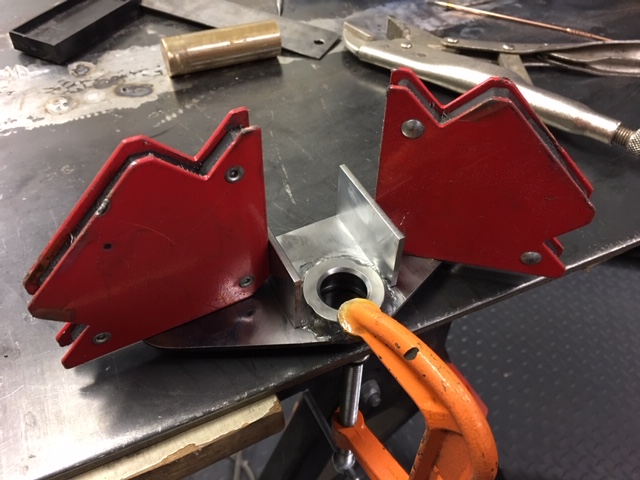 Did have one little "ooops" where I picked up the wrong rocker ... i.e. the one I had just been welding rather than the one I welded 20 mins before. Suffice to say I realized my mistake extremely quickly, but not before leaving my thumb print in the steel. 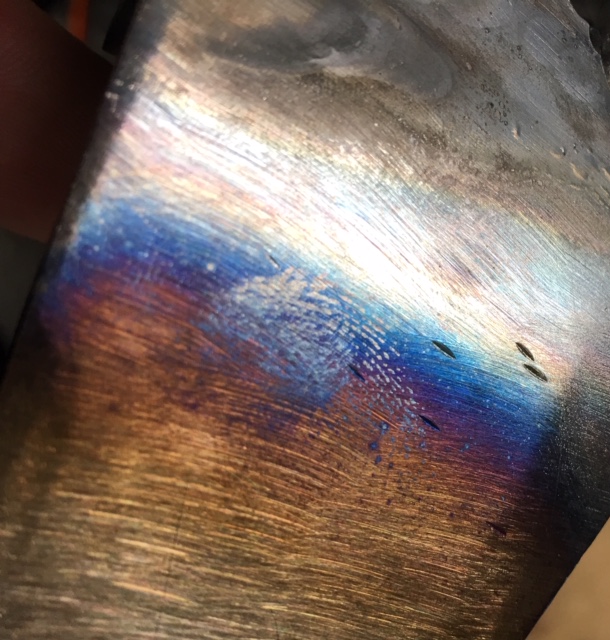 But before too long I had two lovely rockers in my hands. We'll call one "Lemmy" and the other "Bruce". 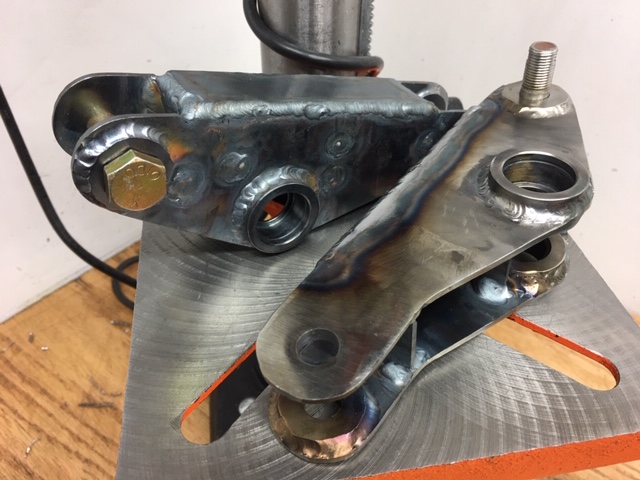 So then onto the upper wishbone, which was the work of a day. 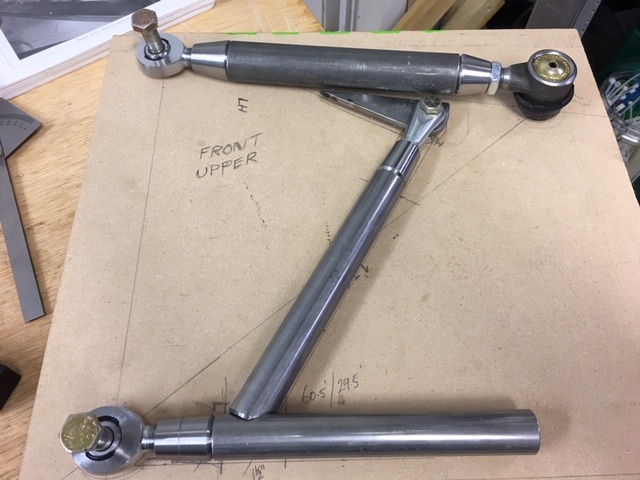 So add that to the lower wishbone and an upright and we have suspension! 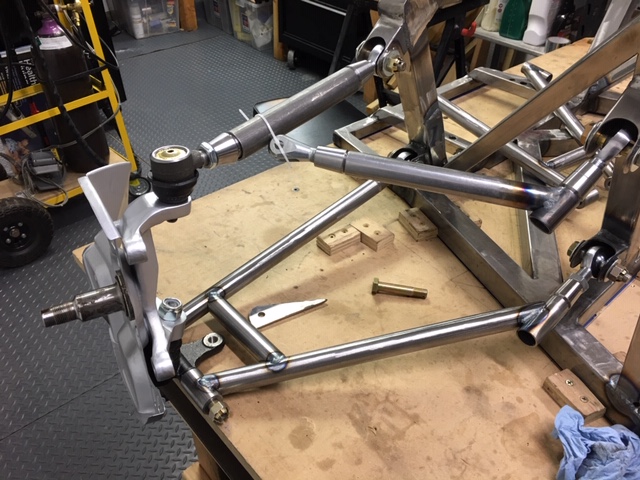 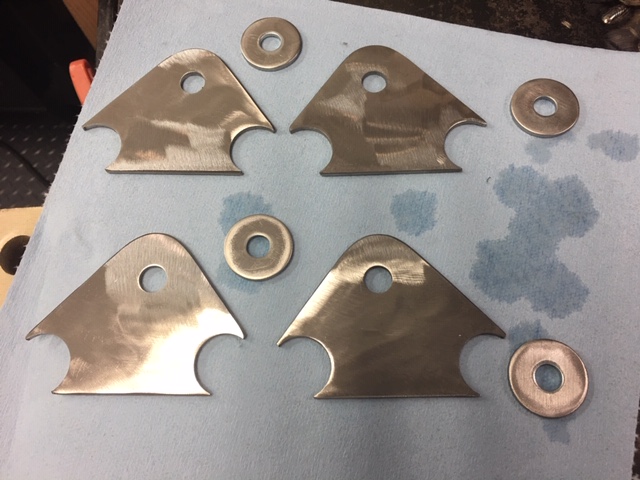 And some tacking added these to the lower wishbone to give a nice result! 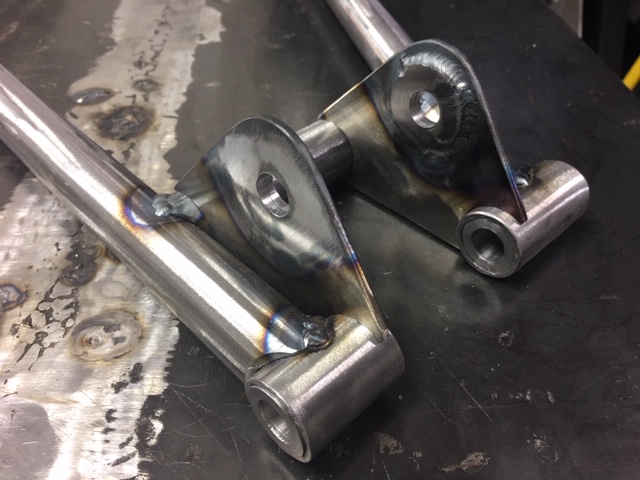 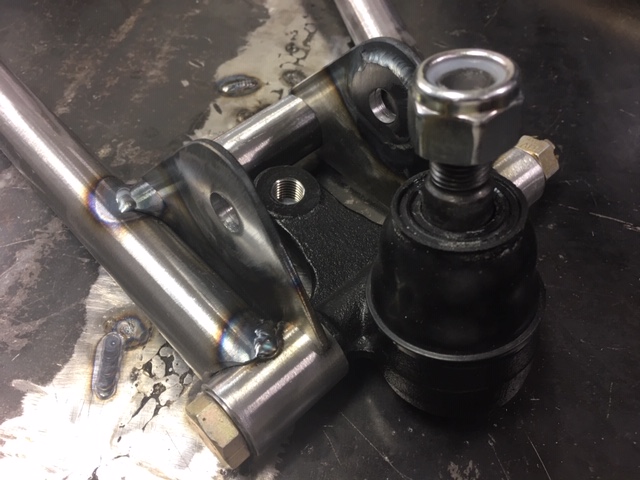 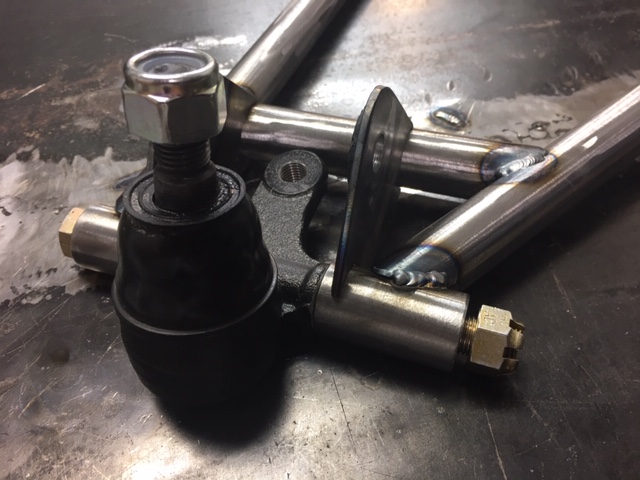 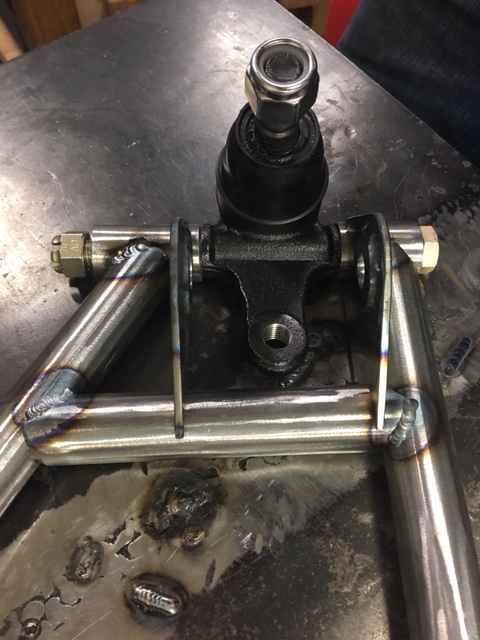 It's at this point where I allow myself a little "attaboy!", which of course captured Fate's attention......

Nothing left to do then other than the final welding. It was a little tricky as there were some quite tricky places to get to, but eventually got it all done ....

... only to find that weld distortion had pulled the ends so far out of line that there was no way a bolt would go through. 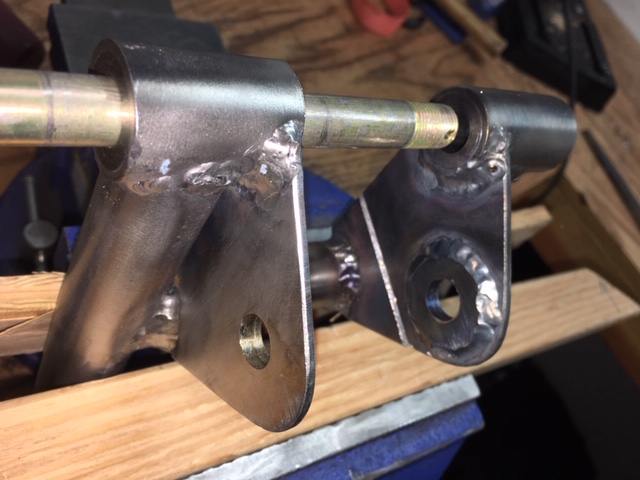 All those warnings Kurt gave us!

I think what happened was that:

a) I didn't have the piece suitably braced. I should have had a bolt through those holes to maintain alignment, and perhaps even a steel jig to keep things aligned

b) Because the welding was quite intricate, I was going much slower than I would on a "normal" weld, and consequently there was a lot more heat going into the piece.

I tried to pull it back into shape, even cutting the mounting tab to allow things to move, but it's not moving, so scratch one lower wishbone and back to square one.

The good news, however, is that I put that wishbone through a lot of stress trying to pull it back into shape. Ratchet straps, a 7lb lump hammer and 245lbs of me all gave it a good kicking and it hardly even moved, so at least I can vouch for

However, the gods of fabrication looked upon our hero and saw his sadness and distress, so they rewarded him with an advert on Facebook offering 4' x 10' sheets of 16 gauge 5052 aluminum for $50/sheet and 16 gauge stainless at $100/sheet, so I now have enough material for all of the floors etc, the fuel tank, and enough to put a new backsplash in the kitchen to keep my lovely wife happy too.

All in all this week I'll call that a tie!
Top

All I can say is that we've all been there, or will be.

I have the burns.

Where two bores have to line up after welding, I drill way undersize, then drill to final size and ream in-situ.
Top

Oh man bummer. Your welds ARE looking quite nice, though, and it's good to see they can take a beating.

OK, so after the somewhat tragic (

) happenings, took a few days off to do some skiing, and now we're back!

First job - make a new wishbone to replace the distorted one. This time I made the lower mount one single piece to help minimize distortion, and once welded cut out the piece where the lower ball joint fits. Everything was going just swimmingly ... until ... I welded on the tabs for the push rod....

With my design the wishbones are the same until the tabs get welded on, so it's really important to weld them on the right way if you're trying to make a specific one.

You can see it coming can't you. There I was late one evening happily welding away. Went back out the next morning and... 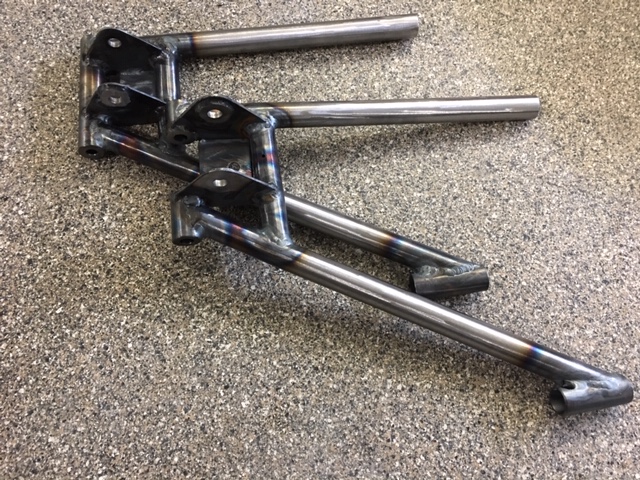 I had made a second front left, rather than the front right I needed!

Please stop! It hurts now! The good thing is that the welds keep getting better, so I laughed, racked one up as a spare and started work on the right one, and another day later I finally had two wishbones. 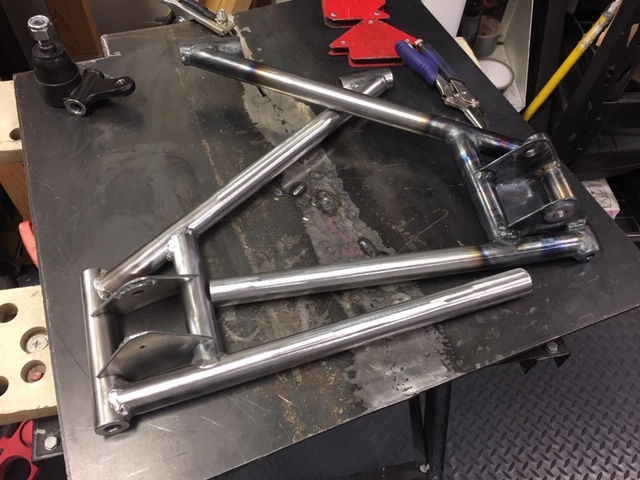 This meant that we could finally put a whole corner on the car, to see how things were going. 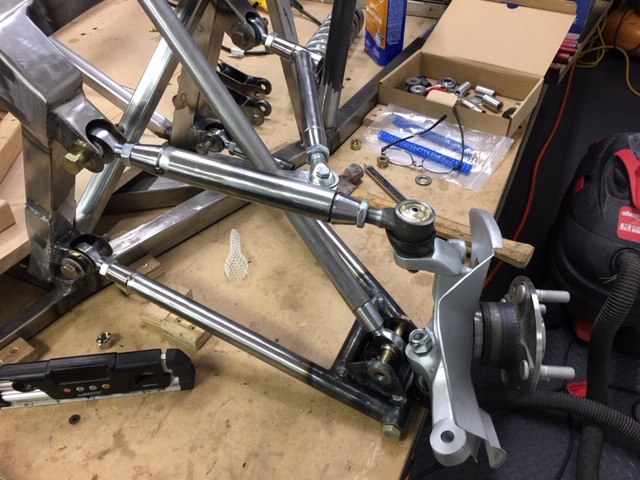 And then onto the rocker arm mounts. A little fiddly as you want them in the right place at the right angle but with a little perseverance I finally have what looks like a whole corner. 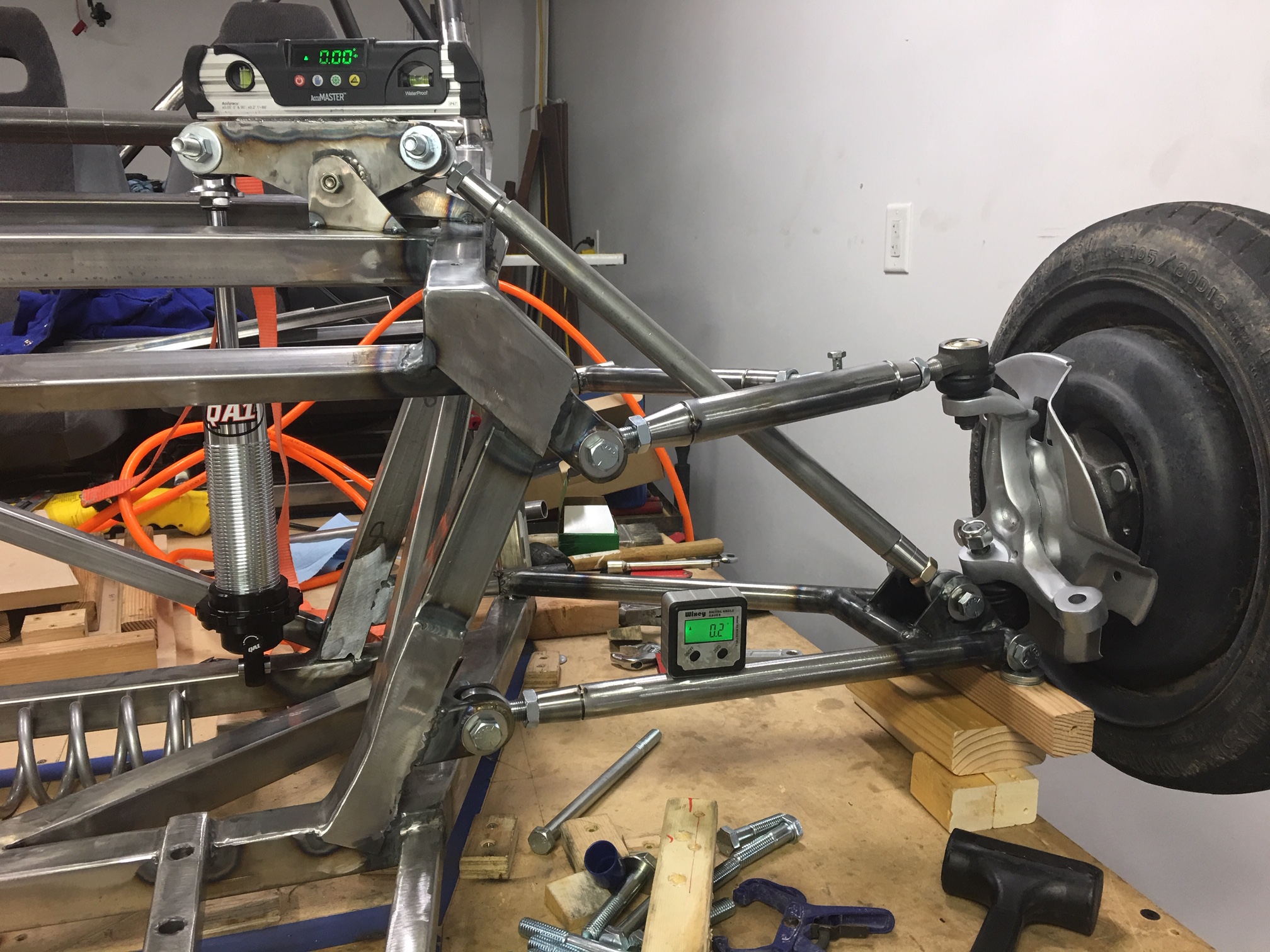 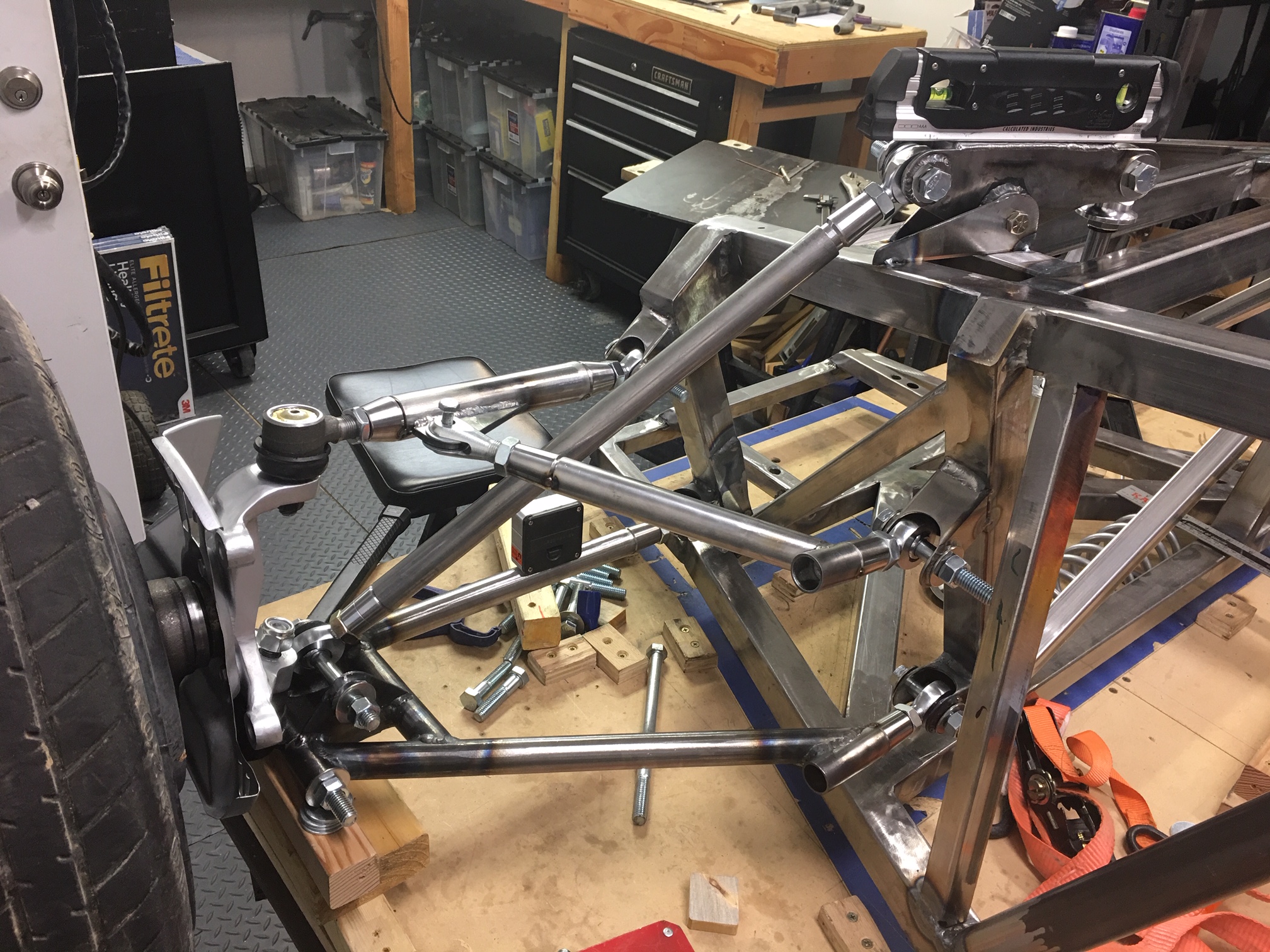 Like my snazzy rims? A wheel on the car for the very first time. Honda Integra spare!

Now before I go and weld this lot solid, can one of you guys have a good look over those pics and check my work? I'm pretty sure all is well, but It's taken so long to get this right that if I weld it all and then find something screwed up I will probably shoot myself ... which would mean buying a gun!
Top

As a sanity check, from ride height, see how much wheel travel there is in bump and droop (before the rocker arm hits something). If I remember correctly, you want something like 3" in bump and 2" in droop. The shock will limit it short of that, so there's no worry about the rocker hitting anything. I did have to notch the square chassis rail for push rod clearance, though.
Top

It felt like a real milestone to get a corner done. Real parts moving up & down

I too put a notch in the top tube to clear the pushrod at full droop - seems to work out best that way in terms of balancing the swing of the rocker with the other motions going on.
Midlana No.2
Top

I'm starting to feel like the oddball for not doing the pushrod-type...

But going outboard saves a lot of time and work. Yours will be the first, so it'll serve as a real-world example for why someone might chose to go simple rather than intricate.

Besides, you can always convert it over later...

I had planned on going outboard......but couldn’t come up with an upper mount setup that I was happy with. Mostly down to the resulting angle the damper would be at, but also an element of the test my car will have to pass - onboard solved a lot of issues so I went that way instead. Glad I did.
Midlana No.2
Top
Post Reply
259 posts