Haven't done an update for a couple of weeks so the guilt is starting to gnaw at me....

The chassis is almost done, at least the fab. Did the diffuser, and was working on the engine mounts. I say was as I was doing one of the cuts and somehow it jammed my drill press and bent the shaft and the quill and knackered all the bearings. It's not much of a bend, about 15 thou but when your reaming holes that's not good enough. It's a cheap press from WEN http://www.wenproducts.com/store/10-inc ... Press-4212 but I have to give them a shout out. They stock every single spare part and can have them to you in days, so instead of having to throw it out and get a new one, for $65 I was up and running again. Great service and not a bad little drill press especially as I took the opportunity to upgrade the chuck. Now reaming holes to +/- 0.001 which ain't to bad for $169.

As to the engine mounts here they are: 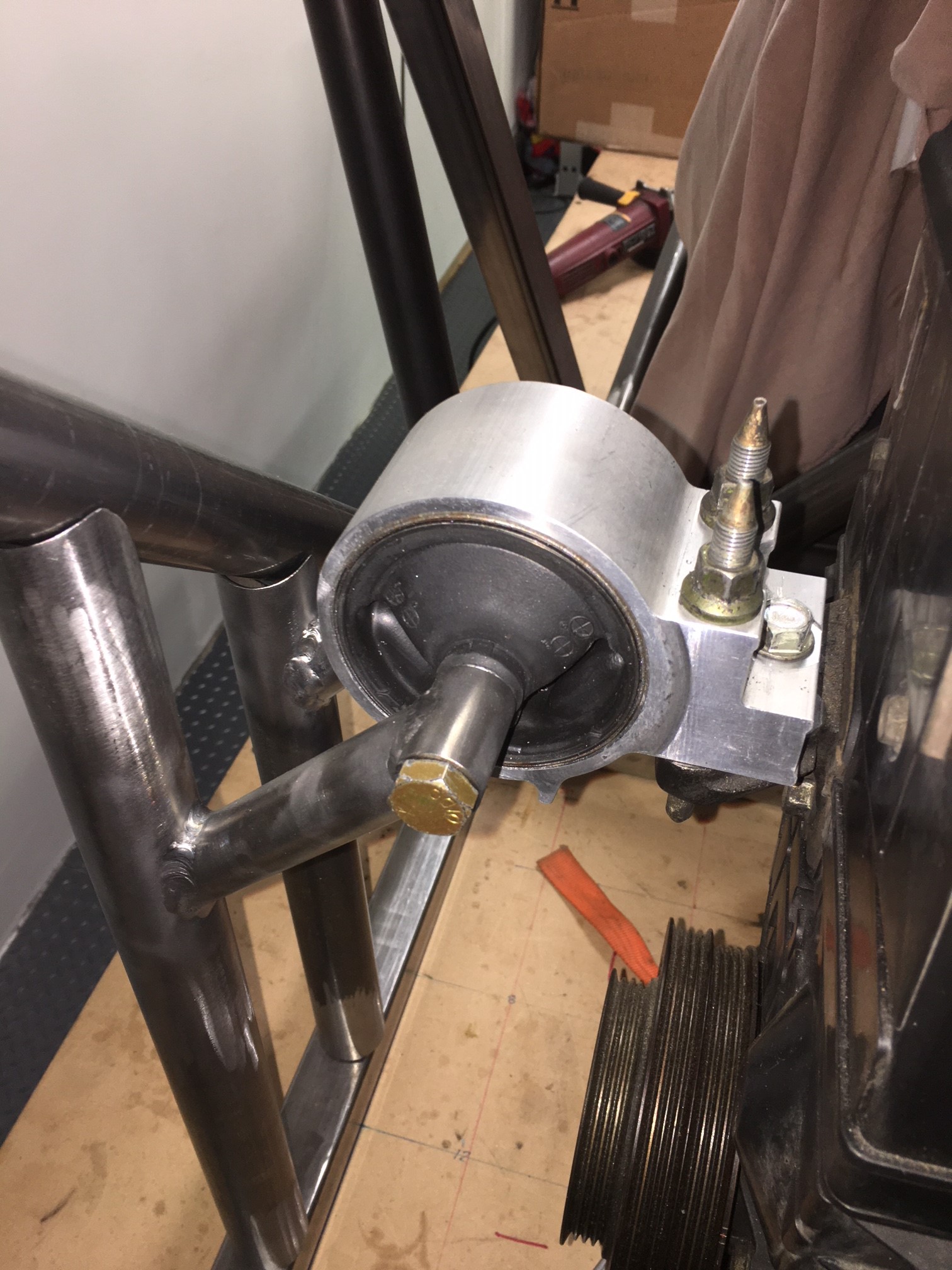 Not quite finished as there will be a triangulated piece across the top from the mount to the "upright" but I'm not going to add those until all of the mounts are roughly in place. Happy with that!

Also got the seat mounts roughed out which also helped me clear my car building "philosophy".

What do I mean by that?

Well, I could spend a fortune and build the perfect car in one go (which of course will never happen!) or, as I came to realize, it's the journey not the destination, so in some areas I'm going to keep it simple and cheap so there's room for growth in the future. In this case it was the seats, where I've decided to reuse the original Acura seats. They're cheap, comfy, hold well and are easy to mount. Upgrades later. So the frame is a simple angle iron/tube construction that basically sits on top of the cross pieces in the chassis, wrapping round them and bolting through. Simple, relatively light and strong, bearing in mind it will need to control my 260lb body should something nasty happen. 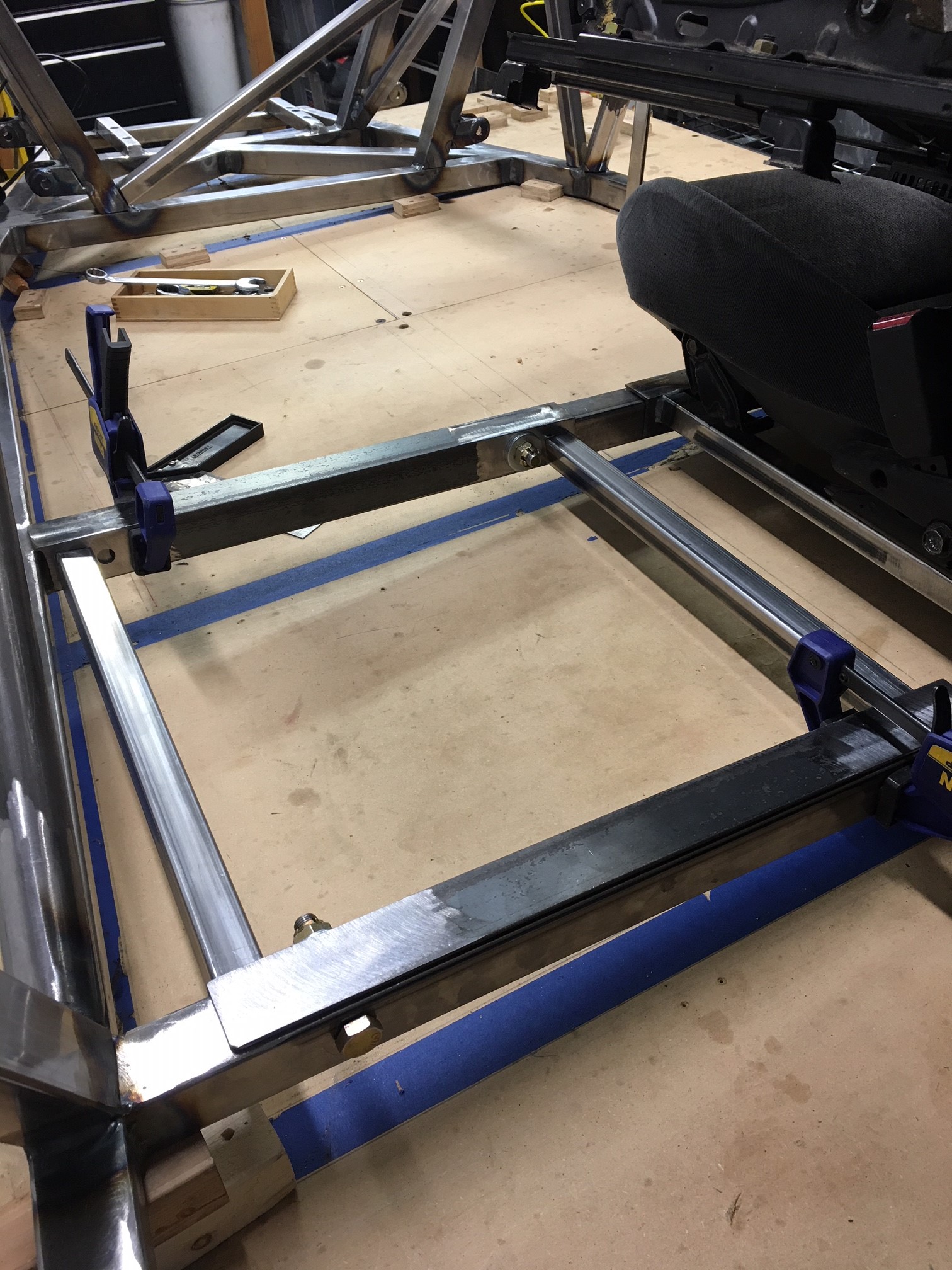 I've also welded up a lot of the front chassis and "linished" as the Bad Obsession guys would say. Happy with the results. 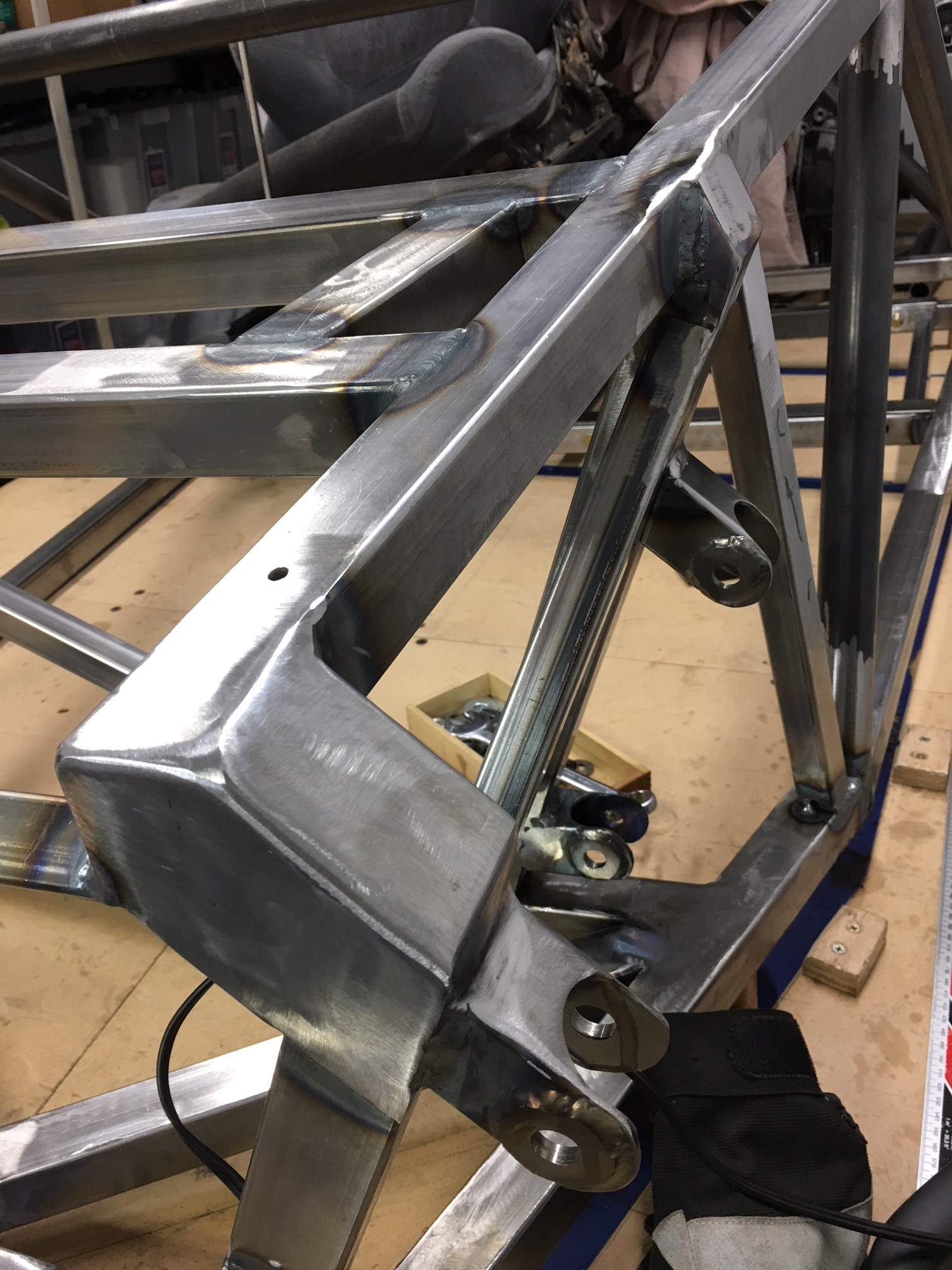 However, during the detailed work it was clear that the clearance between the "head" of the steering rack and the front frame was very marginal, so rather than find out by it knocking away, a little judicious sectioning and strengthening was done with some 0.12" plate. 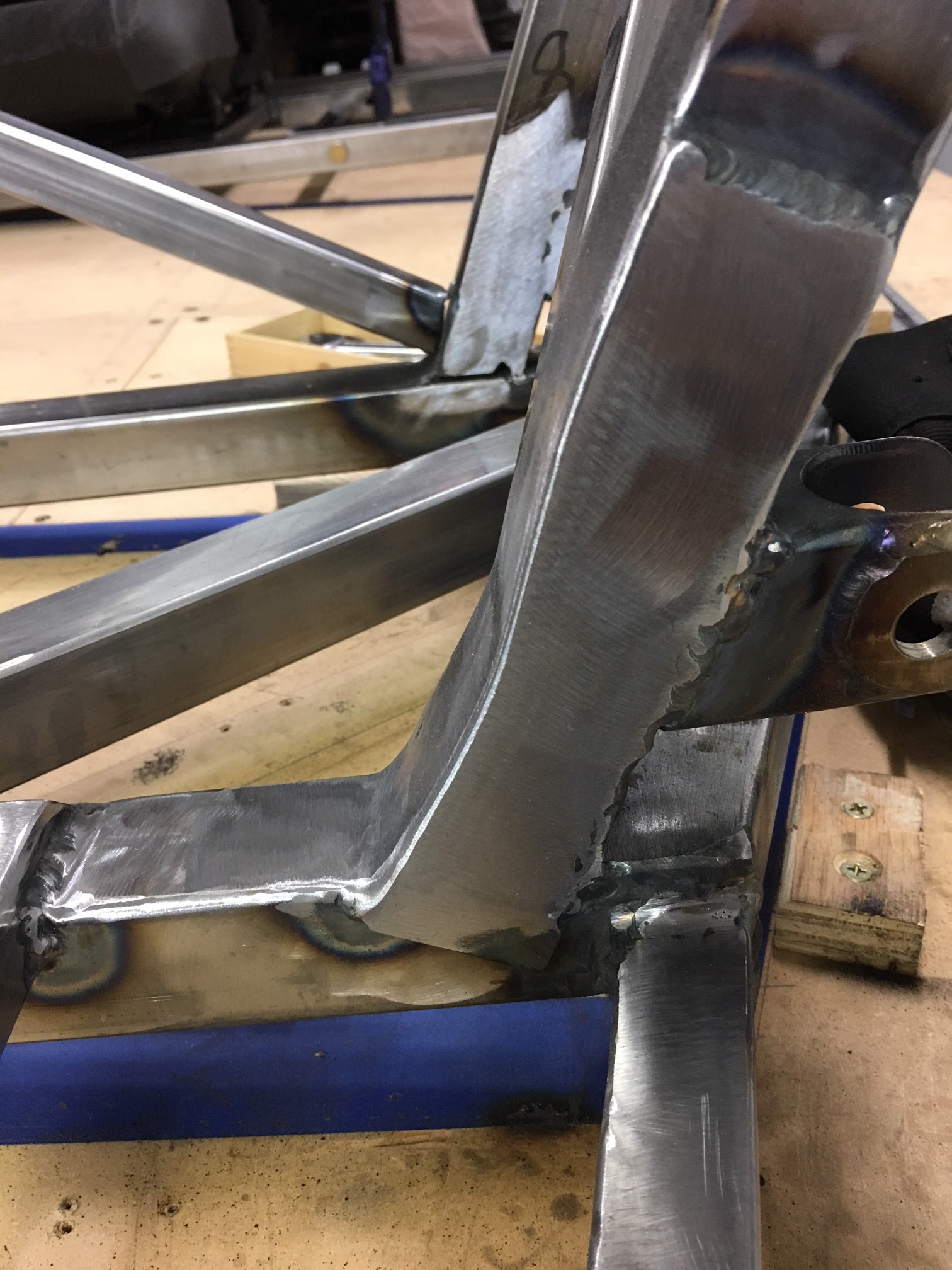 Lastly, as I'm now fabbing bits for the suspension I decided it's time shell out and get the spring and shocks, which turned up the next day from Summit Racing: 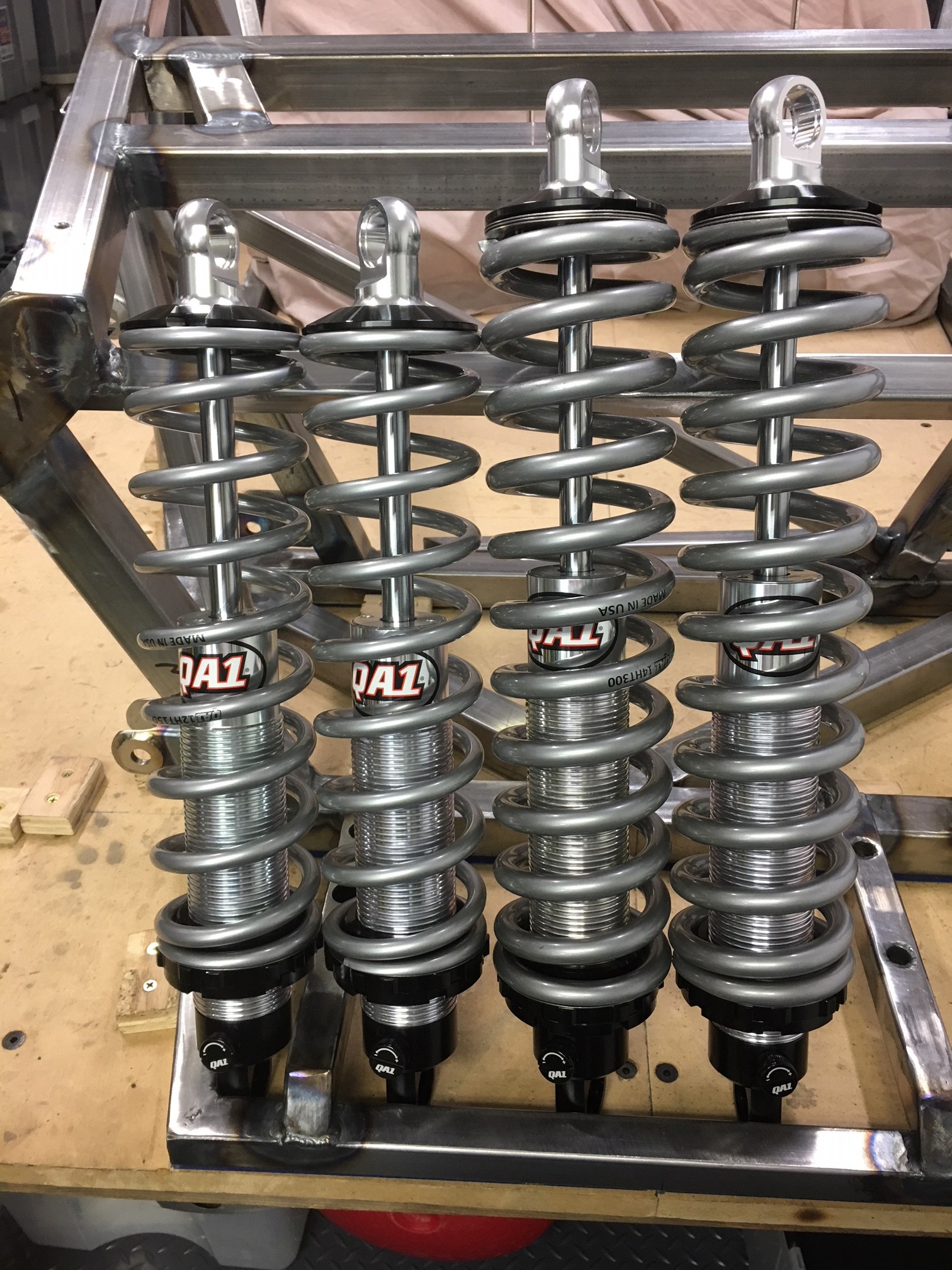 I've gone for the single valved as:

a) Cheaper
b) After 10 years of kart racing I know my driving ability and I'm pretty sure I wont be able to tell the difference!

Moving along OK I think!
Top

steveo wrote:...Lastly, as I'm now fabbing bits for the suspension I decided it's time shell out and get the spring and shocks, which turned up the next day from Summit Racing:

I've gone for the single valved as:

a) Cheaper
b) After 10 years of kart racing I know my driving ability and I'm pretty sure I wont be able to tell the difference!

Moving along OK I think!

I'm beginning to think that, in the interest of actually finishing as opposed to perfection, this is the path I should take as well.
Top

I know what you mean. Sometimes you just need to make a decision. That’s kinda what I was referring to when I talked about “philosophy” earlier. Kind of a policy to make decisions against so you don’t get into analysis paralysis.
Top

Wow! I've been gone for ages!

The nice thing about having a cabin in the mountains means we can get away from the Phoenix heat. The bad thing is that all progress on the car stops ... especially as we had a pipe fracture and screw up the laundry and garage while we were away ... sooooo ... been busy on other things.

First ... lower front suspension wishbones which means a JIG! The nice thing of having the car modeled in FreeCAD is that it becomes simple to design a jig. Just make a negative of the part! So off we go again !!!
Top

Progress on the front lower wishbone!

First there was the plan! 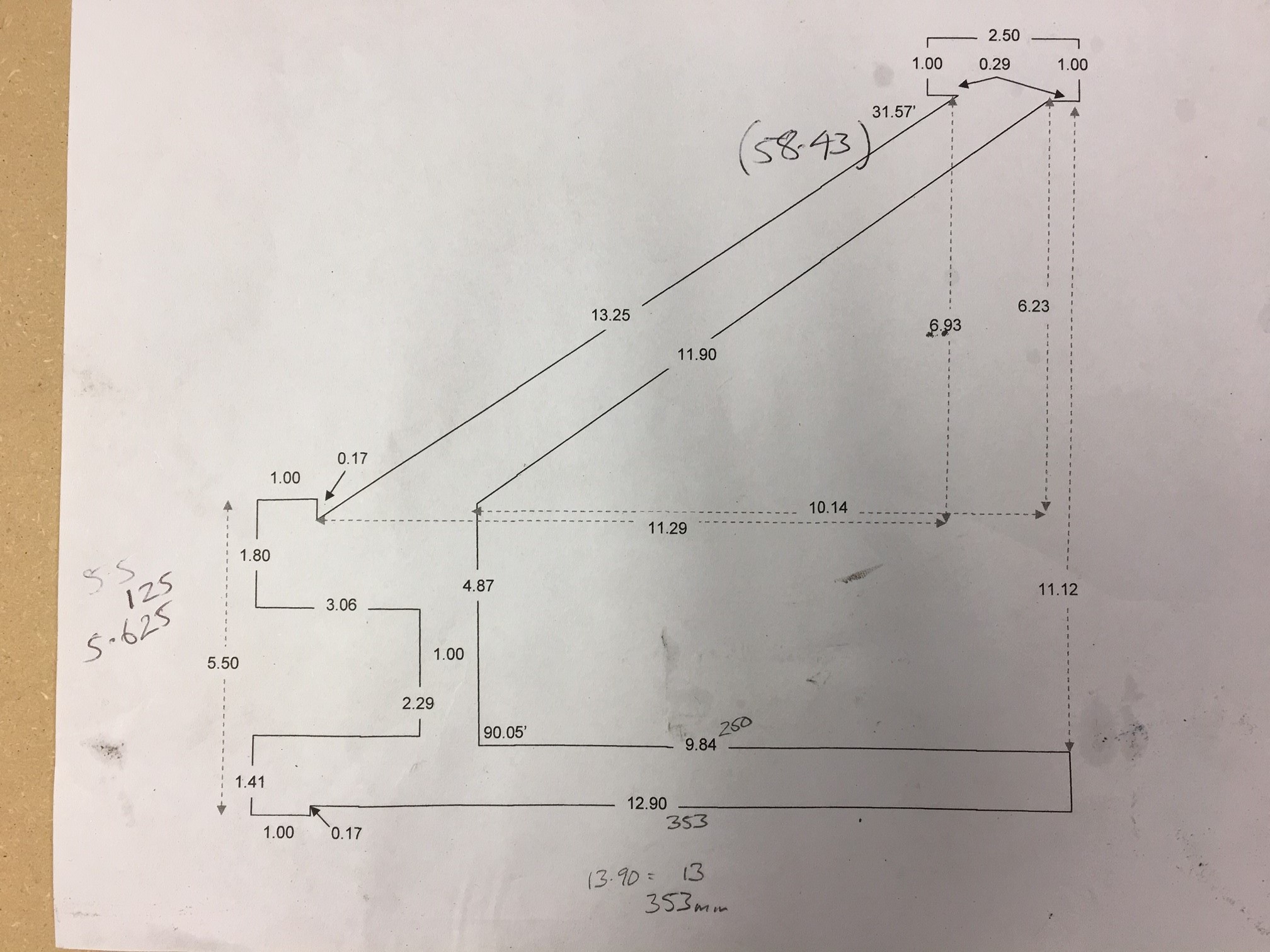 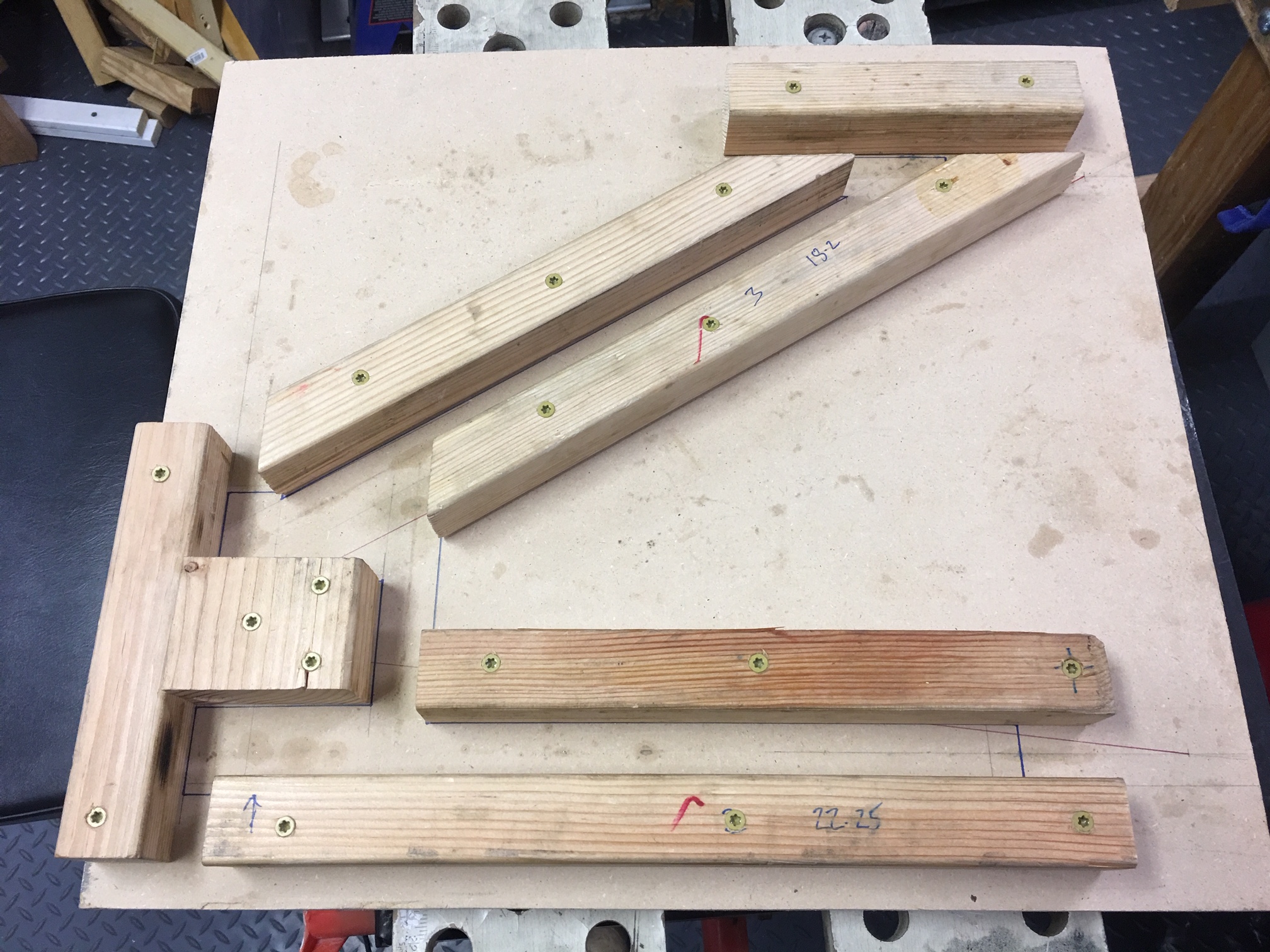 Which led to some cut metal! 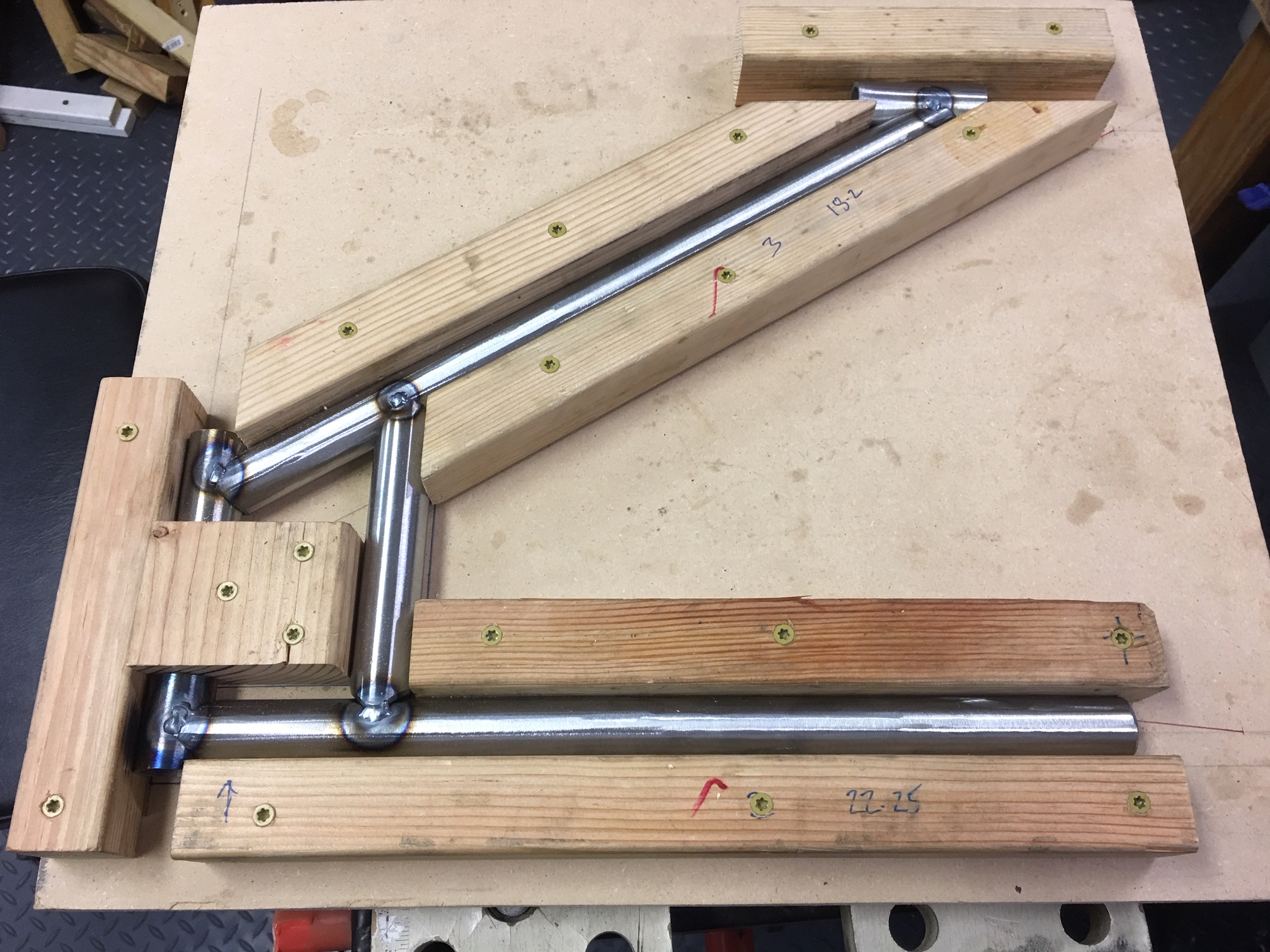 And finally with some tack welds and some loosely held bungs we get to see what it looks like on the car! 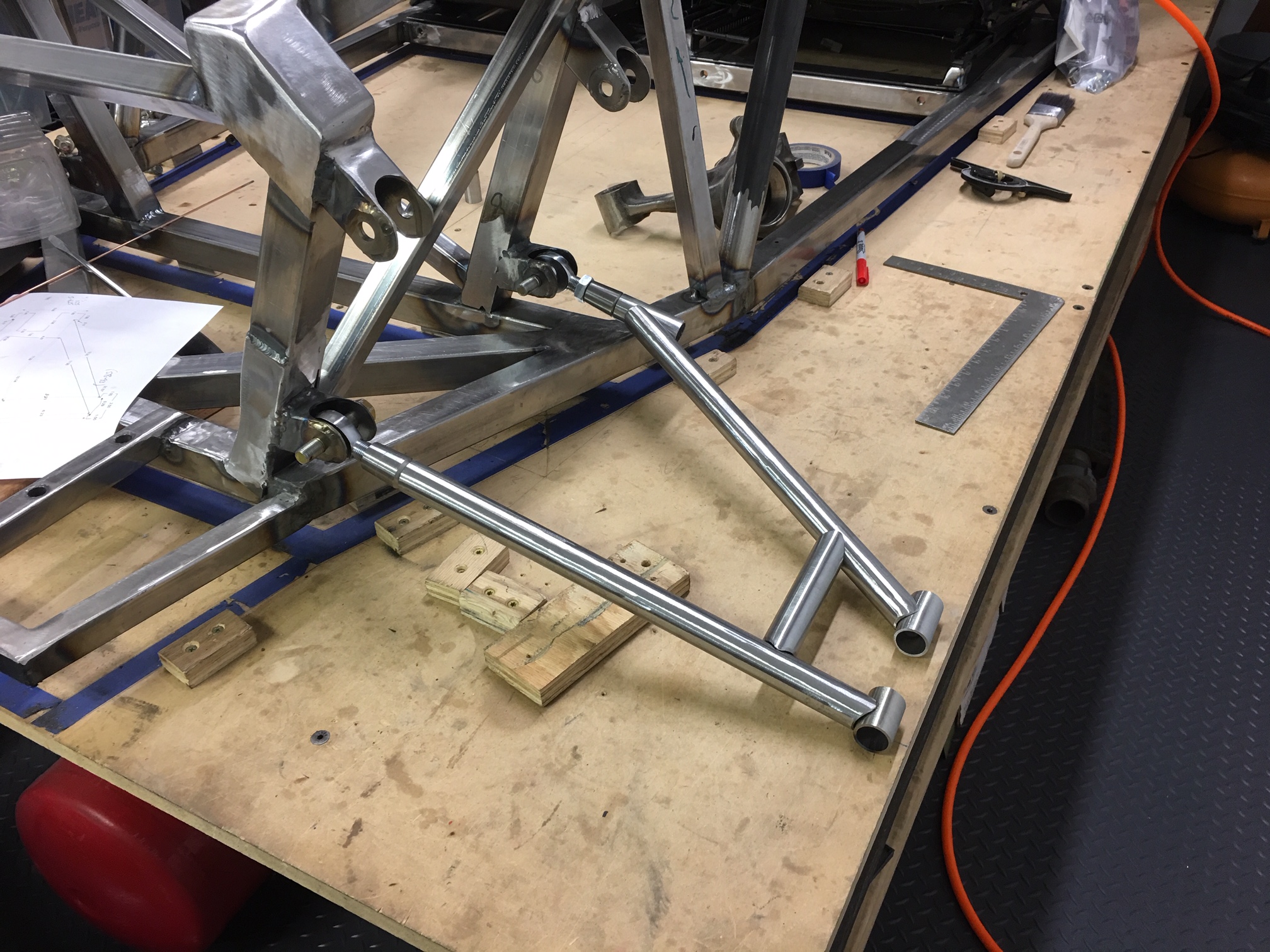 The major change was how the rear tube approached the mounting point. In the original design it was at an angle, but once drawn up it became clear that the angle was too acute and the heim joint would foul on the chassis, so this was changed for a small angled joint on the rear tube, which actually looks quite spiffy!

Very happy with this though. Once the jig was done the actual manufacture was easy and of course making two only took slightly longer than making one!

Onto the upper joints!
Top

I like seeing the subtle variations in every build. It's exactly what I was hoping for, that everyone would get to the point of seeing where it needs to go, and gets there one of the million different ways of accomplishing the task. It also means that when your car is on the road, it's more "yours" than you know.
Top

Thanks Kurt and I agree! Slavishly following instructions is all very well, but if I was going to do that I'd have done a kit. Solving the problems is half the fun (and of course often a source for a whole new set of problems).
Top

You know that bit in the book about minimizing distractions.......

I've been after a small lathe for a while, to help with the car but also because I used to love lathe work as a kid at school. Well this week I finally got one. An old South Bend Model 405 from 1935. It's the predecessor to the classic South Bend 9" Workshop lathe. 84 years old! And works like it was brand new! And of course a lathe needs a home, which then required a remodel of the garage, and *boom* there was another week gone! It's mounted on a nice Craftsman bench, but it was flexing way to much, but three days and 240lb of concrete solved that problem. Just take the worktop off, turn it over and fill it full of concrete. Doesn't flex now! 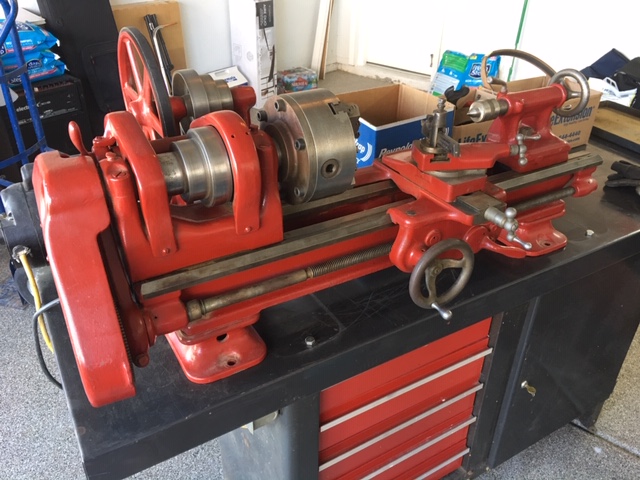 However, it's already proved useful for making suspension bushings. Really does have a lovely finish on mild steel, and it's fantastic to be able to fabricate moderately accurate parts again! 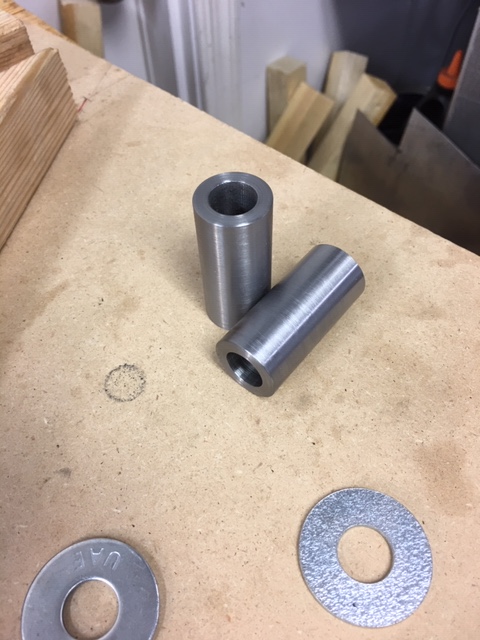 These are the bushings that go in my re-design of the front lower wishbones, so once they were done I was able to insert them in their mountings. 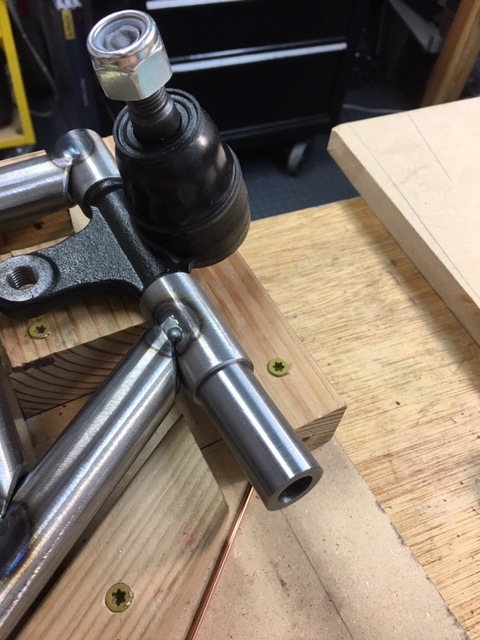 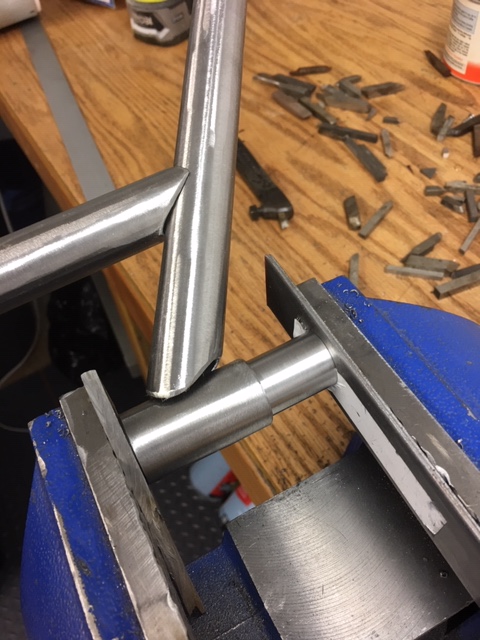 This way should they wear and get sloppy I only need to push out the old ones, fab new ones and push them in, rather than make an entirely new wishbone.

This meant that I could now fix both ends of the wishbone to ensure the geometry was right to get some more serious tacks and finalize the exact dimensions. 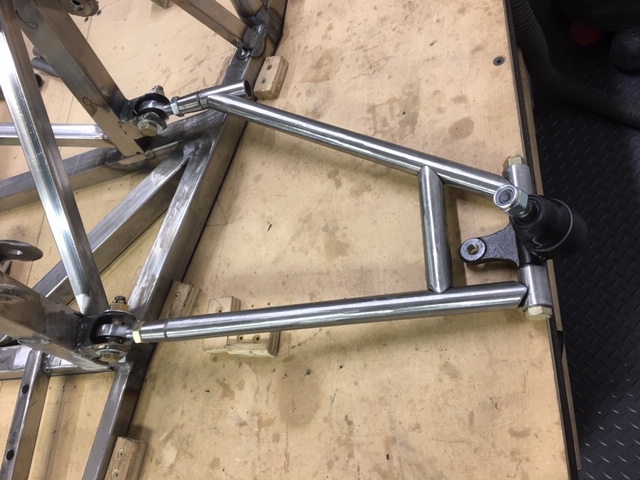 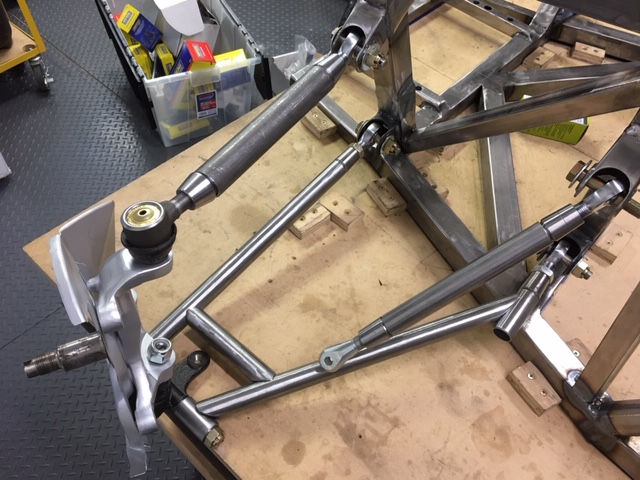 I had overlookled that I need to add a second tube on the upper rear arm to allow for the angle round the suspension mounting, but that's an easy fix.

I think I'm finally getting the hang of this TIG stuff! 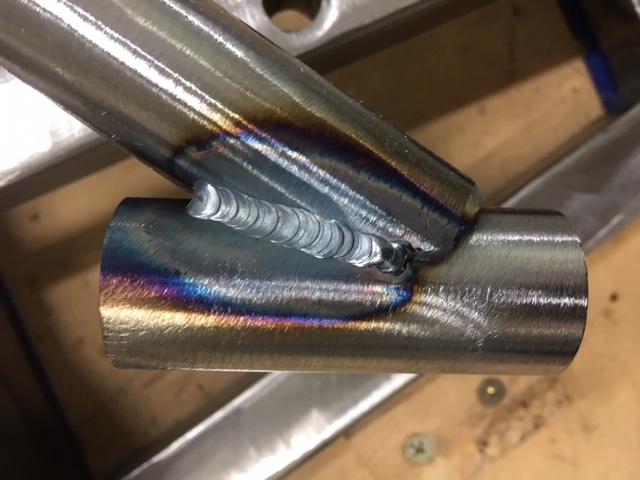 Hi Steve,
I'm curious about the mounting of the lower ball joint and your comment about putting in replaceable bushes. Is the bottom ball joint supposed to pivot on the end of the arm as well as the movement in the ball it's self?

I was going to suggest "Glacier" bushings that I've used in a similar situation but then couldn't quite work out if the joint is supposed to move or not.