LOL! You nailed it Kurt!

Don't get me wrong though, still absolutely loving it, and the learning and self development is part of the game. It's learning how to really handle those issues and keep them all in context of the bigger picture and still keep moving forward. It's getting to the point where when on occasions I walk in the garage there's a little "Wow. Look at that!" moment.
Top

Which will be perfectly balanced out when you do the electrical, walking into the garage and thinking, "I've spent months on it, and it look exactly the same!"
Top

Oh thanks Kurt! There's me all trying to be positive and you just roused my darkest fears!!!!

Sometimes things just go right. Now it may have been massive over preparation on my part taking two weeks to do what y'all would have done in two days, but it worked!

So I made up all of the front suspension mounts. I used .120" thick washers all round to ensure a wide bearing surface. The prep of all the mountings went well. Strange - could have sworn I had pics but no idea where they went.

Fitted the jig to the chassis. 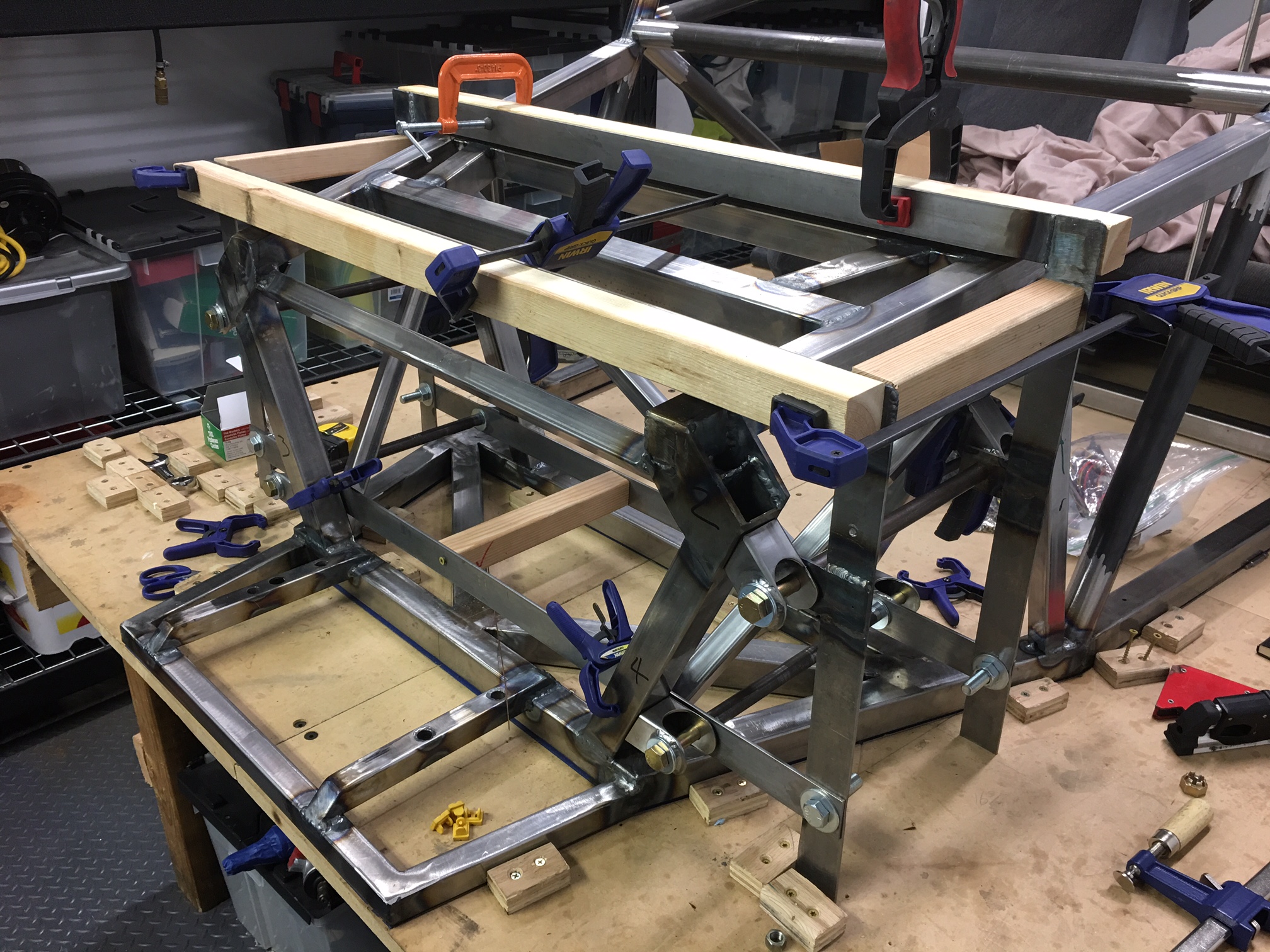 The jig flexed a bit and I don't like things moving so I did a bit of extra bracing to ensure it was well fixed. 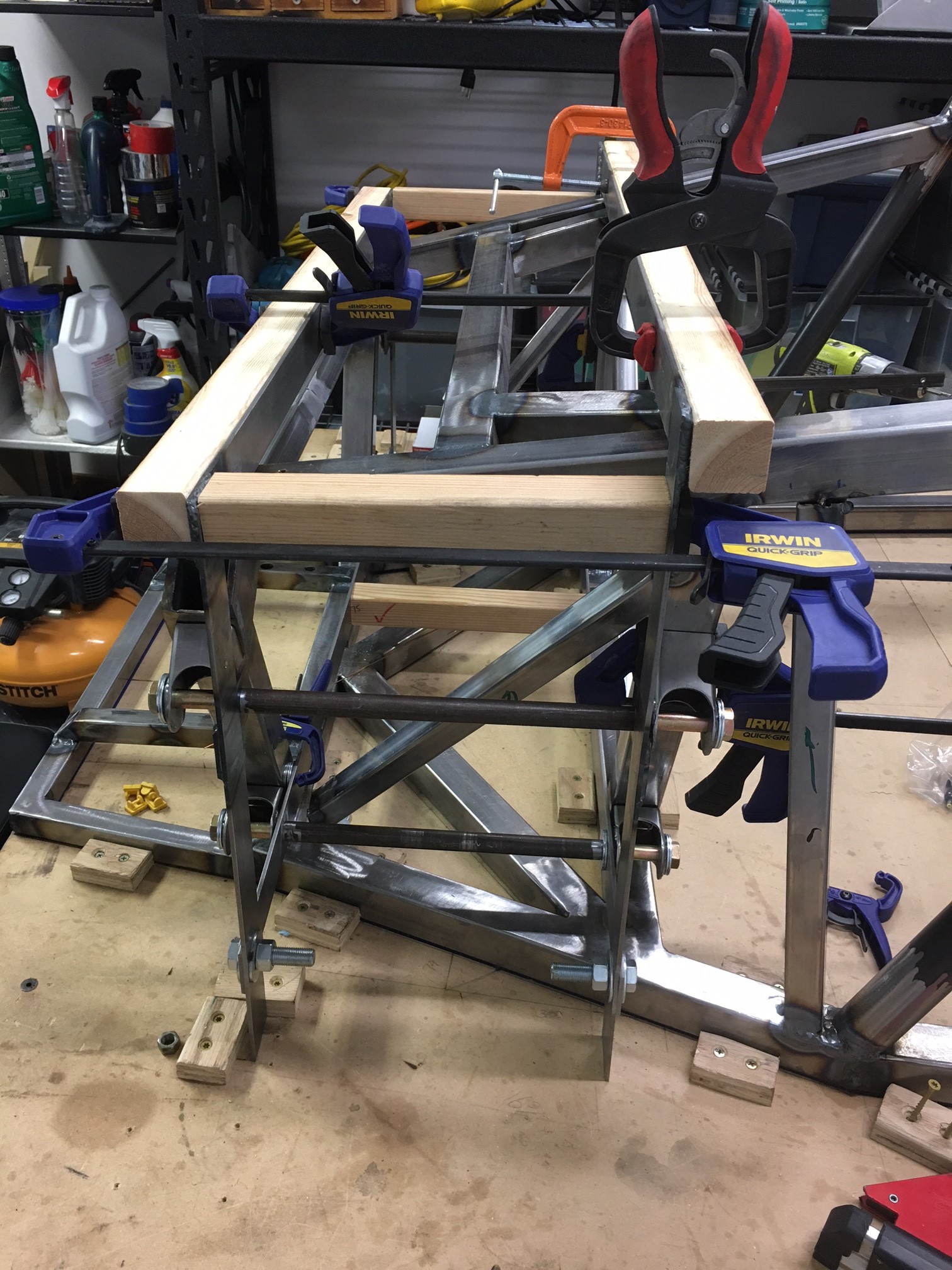 Then nothing to do but tack these little devils in place and see how it came out. 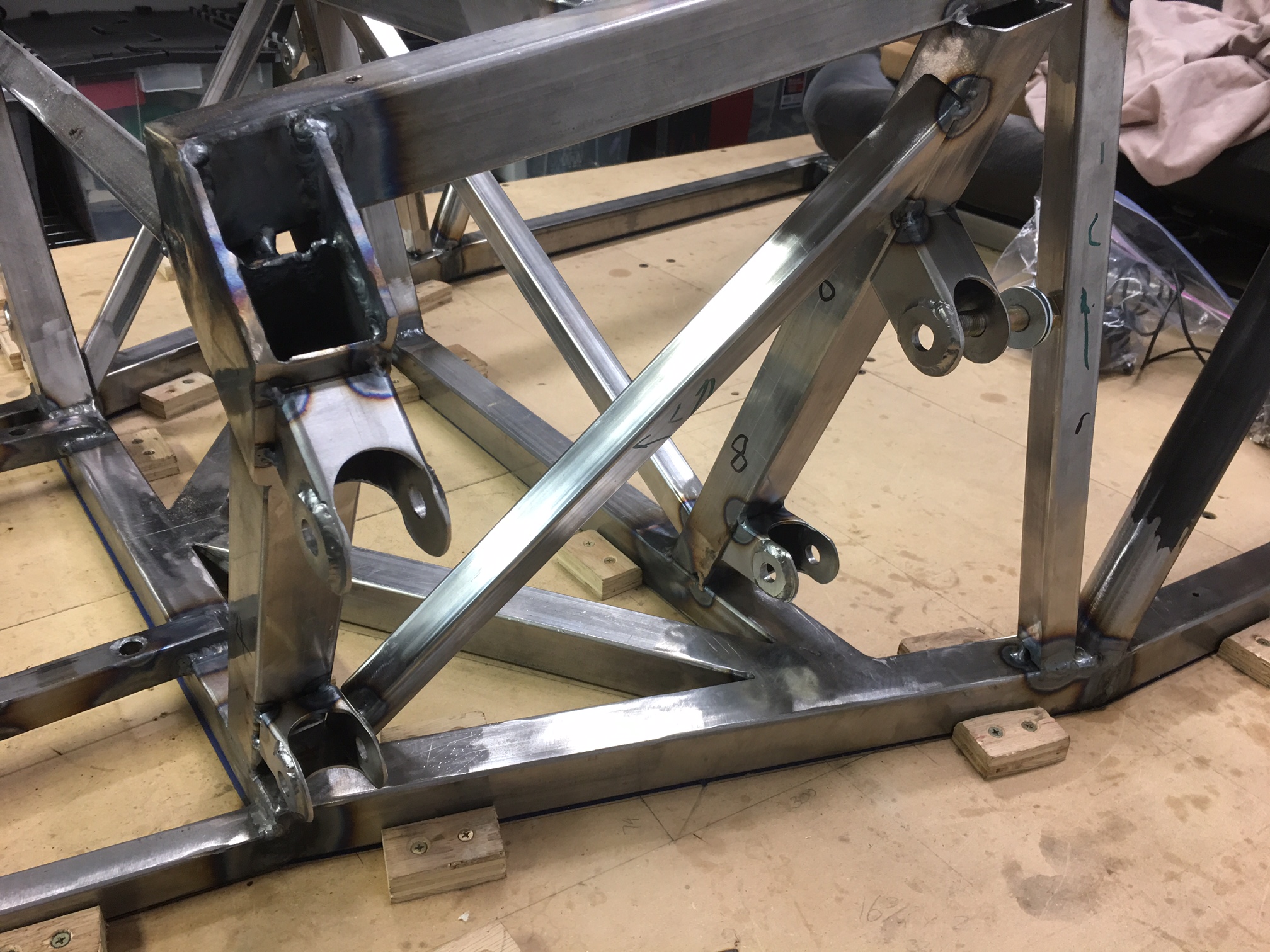 Very happy! No apparent distortion or misalignment. I can take the jig off and re-attach the threaded tubes and everything slides together nicely so I'll take that as good.

One minor problem though. Anyone see the problem?

Yes ... Important to check that bolts can be removed AFTER the bracket is welded! Doh! Not a biggie! Those tubes are only tacked. Made me laugh though!
Top

Been there done that. Usually only takes once to learn to think ahead and "be the bolt" to figure out which side it's best installed from. Somewhat related, if given the choice, I design the bolt to be installed from the side that, A. It doesn't fall out if the nut comes off, B. Points the threads away from oncoming rocks that get kicked up and may damage the threads.
Top

Had a busy couple of days...

First off got the rear subframe fully welded and mounted into the car. It looks like I got a little distortion during the welding as the two upper tubes are no longer horizontal, but we're only talking +/- 0.2' so I figure that's OK. 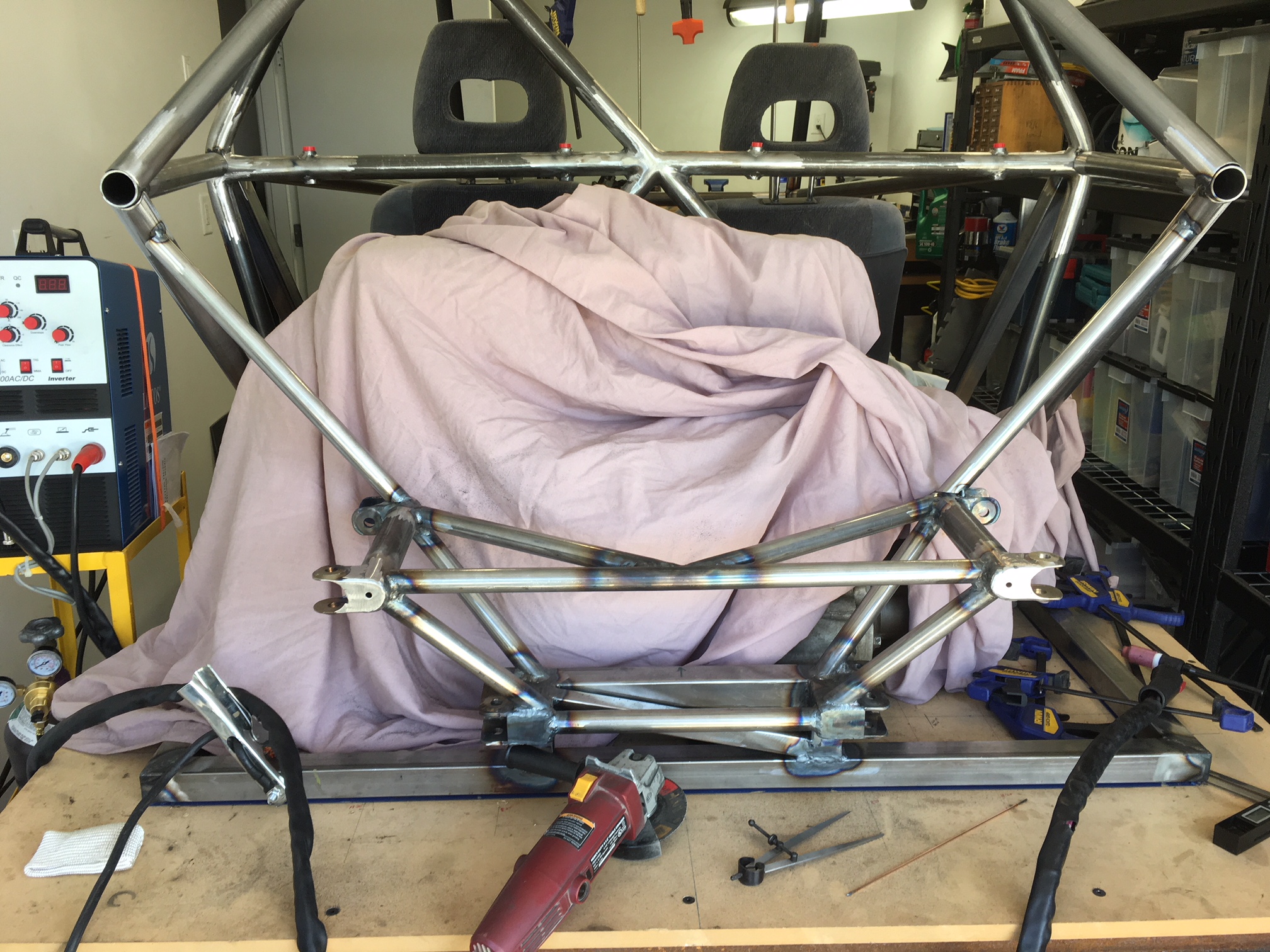 This required that I have a pretty good grip on where the motor and tranny we're going to sit. Dug out the motor mounts and made up some adjustable "feet" for the motor and tranny so I could get it in place in 3D. These worked really well and were very simple. Just some angle iron, couple of holes, weld a nut and put a bolt in it. Makes it extremely easy to place the motor very accurately. One on each corner and you have total control. 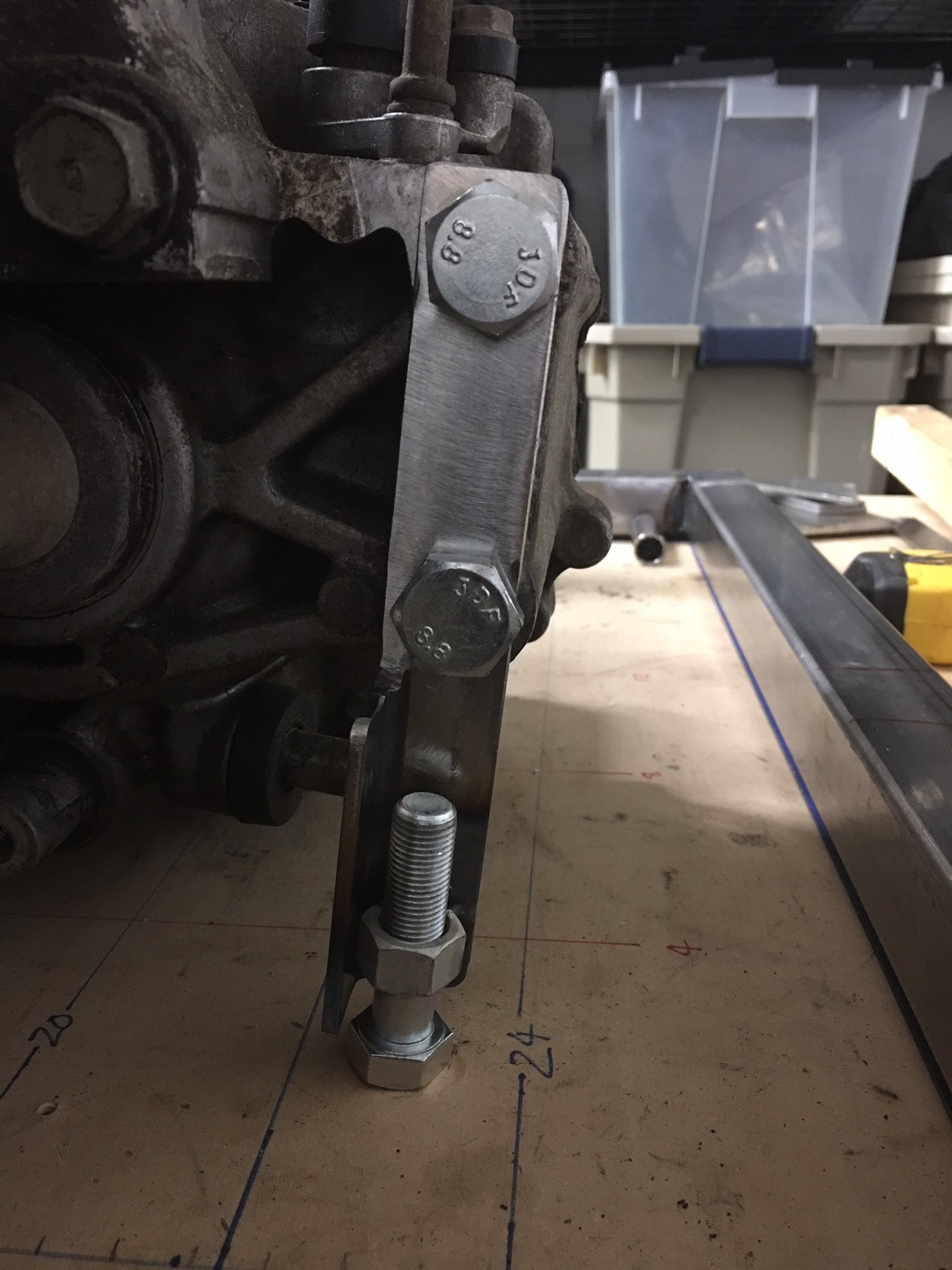 The only suspension mounts left to are the forward mounts for the trailing arms. These have been puzzling me for a while as with my cage not being vertical (because I'm a fat bugger!) I can't just weld a couple of plates because the inner plate has nothing to support it. Thought about welding a plate across the diagonals but this seemed very crude. Instead I came up with these.

I have to incline them 5' to go from the lower chassis bar to the upper bar (303 -> 309) but then mount the suspension bolts horizontally which created some interesting fabrication.

I had to have three goes. The first one was OK, but some shortcomings in the fab left me a few problems. Solving these gave me the rework and copying this the pair! Here is one in it's proper place: 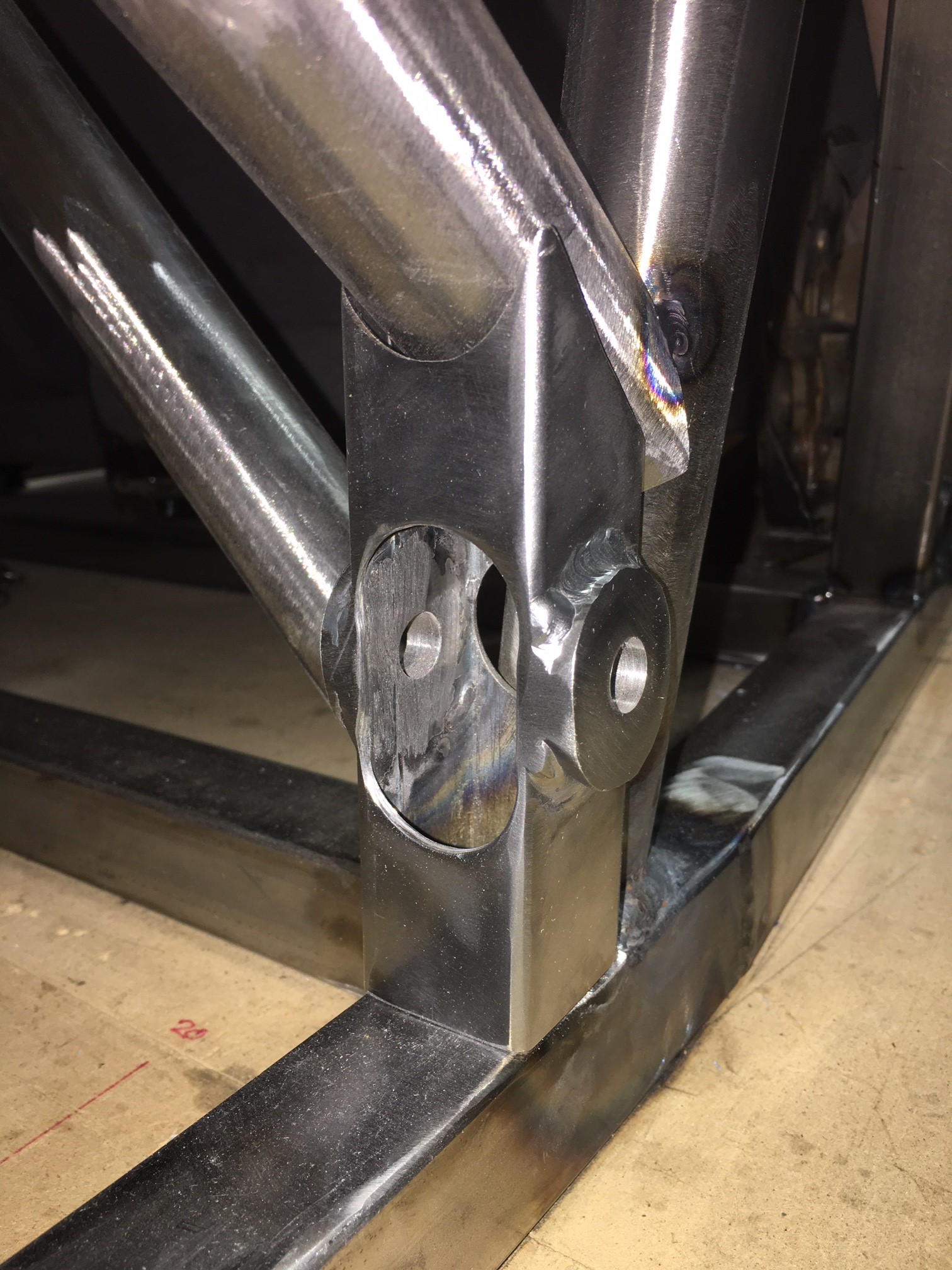 Midlana1 wrote:Been there done that. Usually only takes once to learn to think ahead and "be the bolt" to figure out which side it's best installed from. Somewhat related, if given the choice, I design the bolt to be installed from the side that, A. It doesn't fall out if the nut comes off, B. Points the threads away from oncoming rocks that get kicked up and may damage the threads.

Yep, you learn pretty fast in racing that, if possible, bolt heads are always forwards or upwards. They get beat up less where it matters, and have less tendency to fall out when the nuts get loose (which is pretty much a given on race cars with solid mounted engines, everything wants to vibrate apart).