It is a nice looking A arm.
Top

I'd like to see how the whole assembly looks. It certainly fits the bill strength wise. I suspect it just looks 'odd' to my eye as I'm only used to looking at the more common designs.
Top

What did you do with the damper mount?
Top

Actually I was completely focusing on the LBJ mounting so I just wasn't considering it. I'll factor that in next. I'm hoping it will join neatly in with the webs that hold the horizontal end of the LBJ.
Top

Back to the lower wishbone then...

Went back and re-aligned to the correct geometry as the first version was just a guess. Also looked at incorporating the rather important push-rod mount. Here's the latest version. I'm much more comfortable with the potential failure modes here. Multiple breakages are required before we get to anything falling off, and even these can be mitigated with some judicious safety wire. 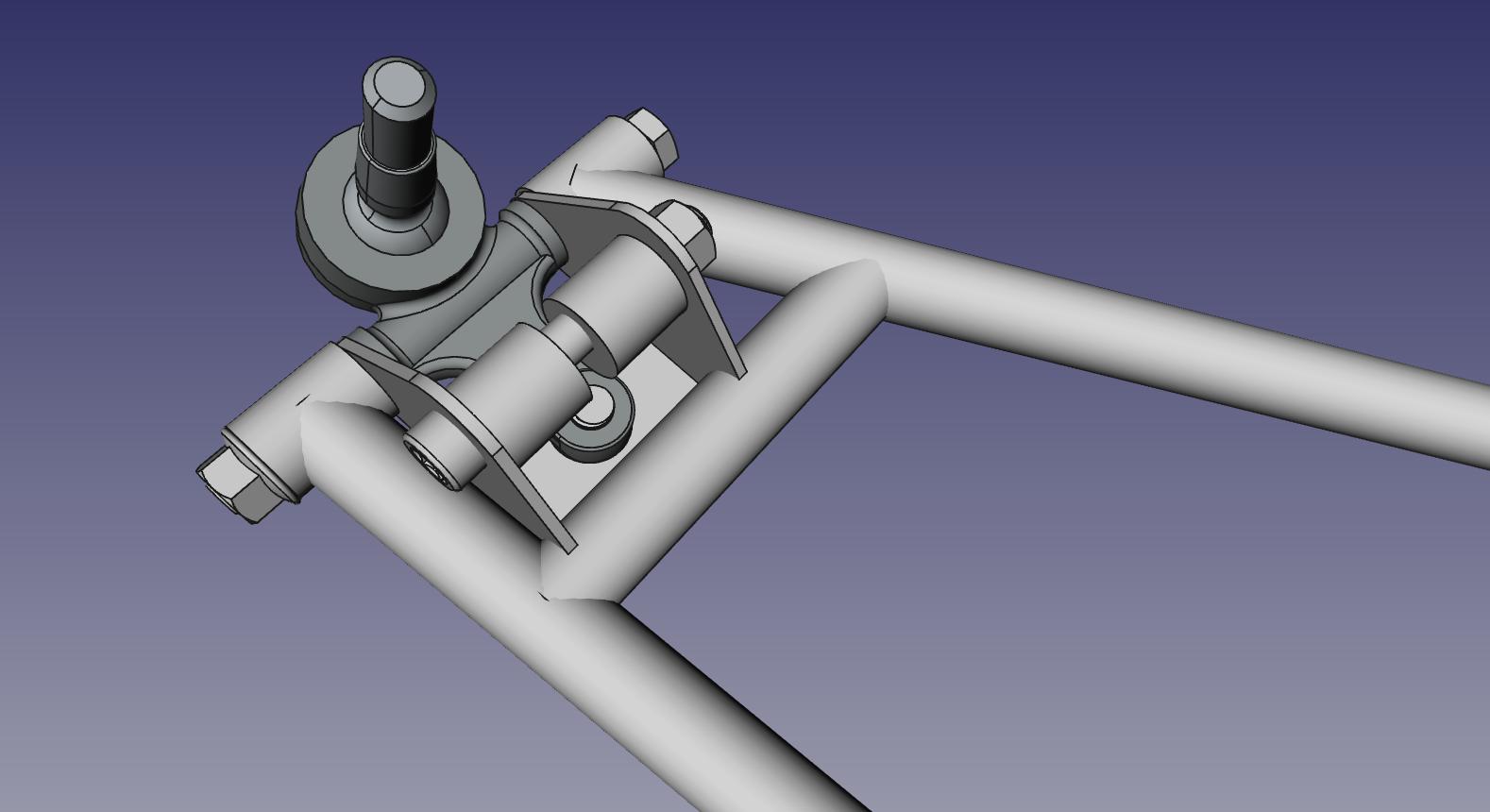 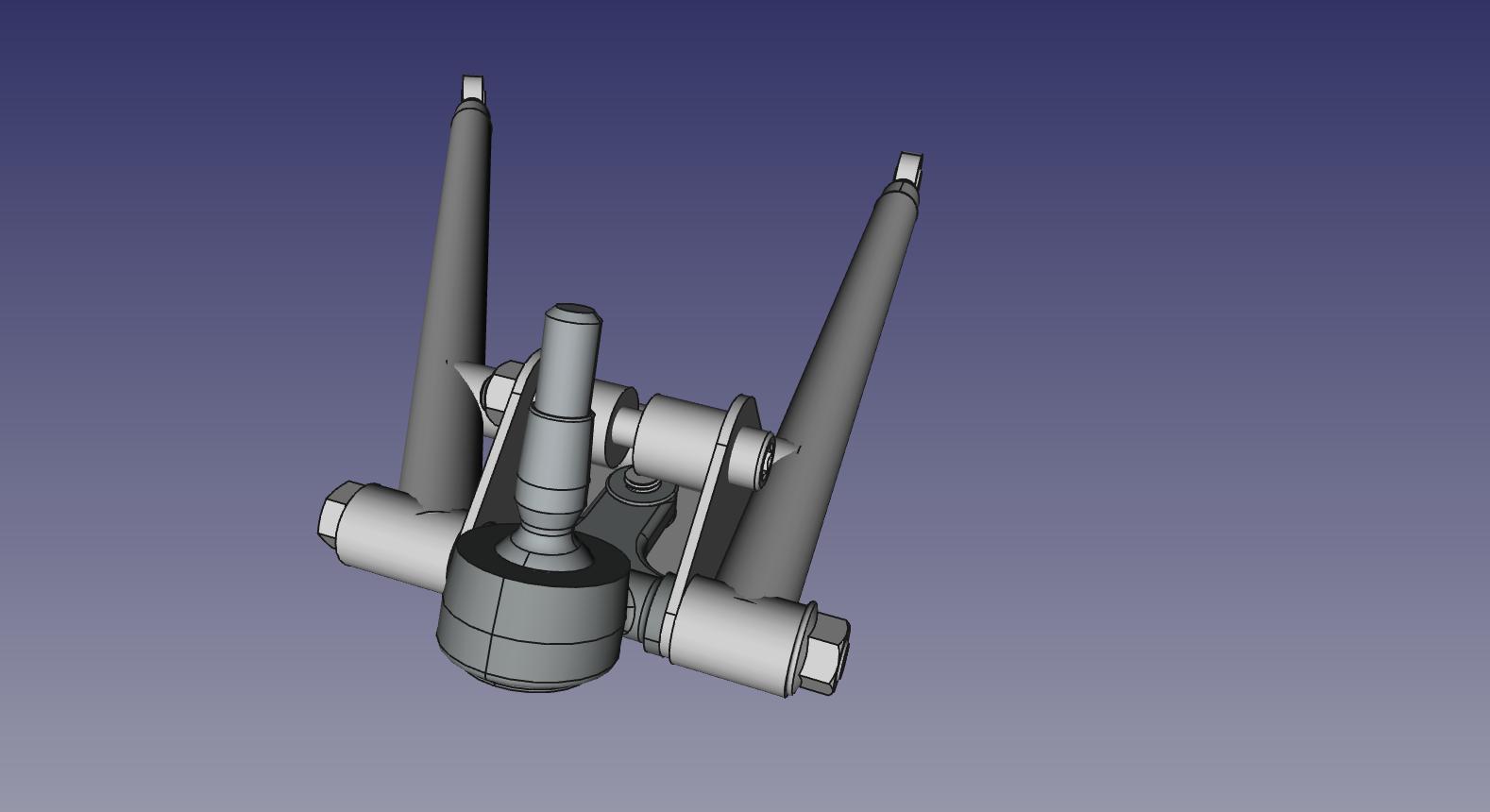 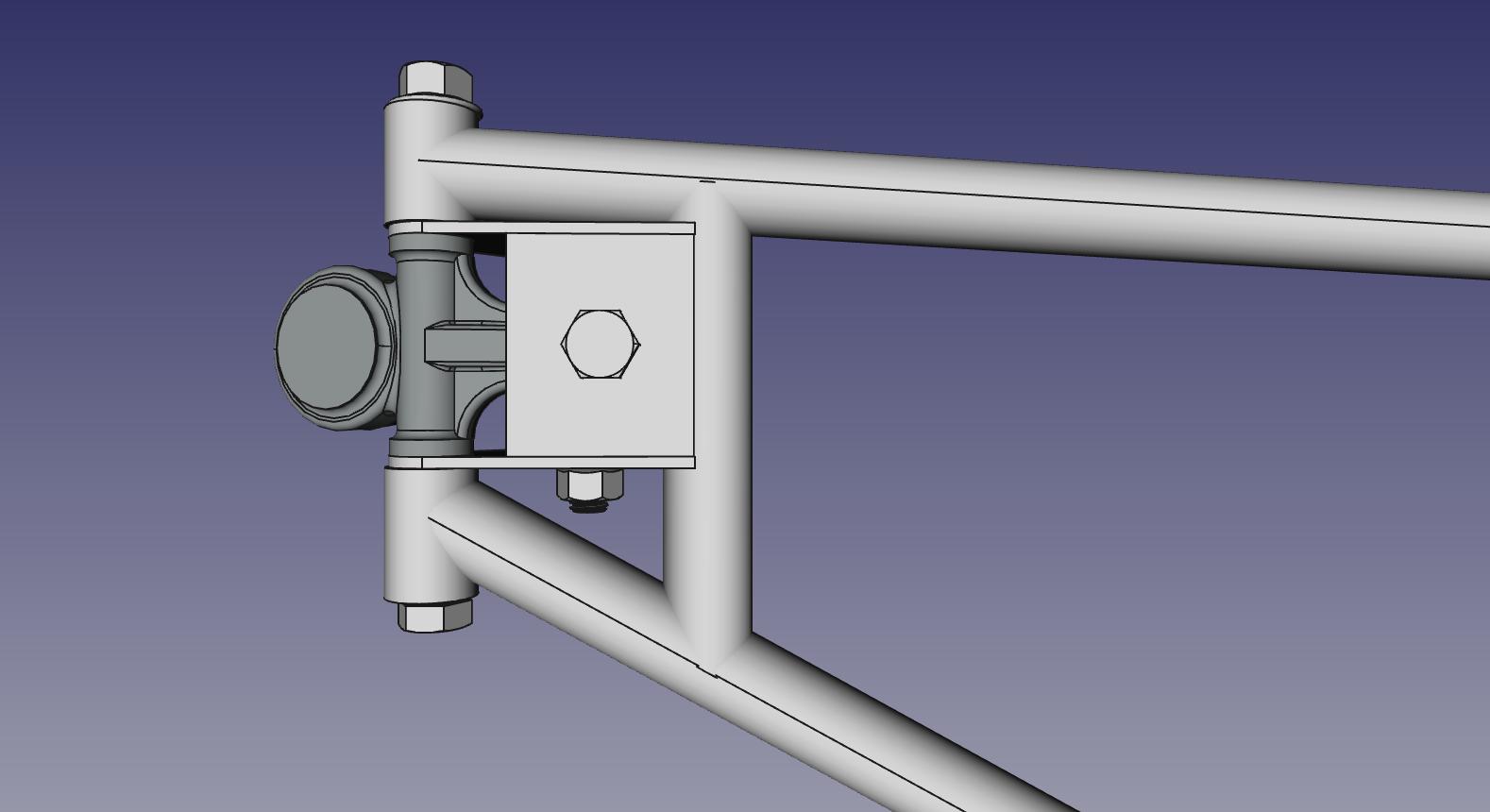 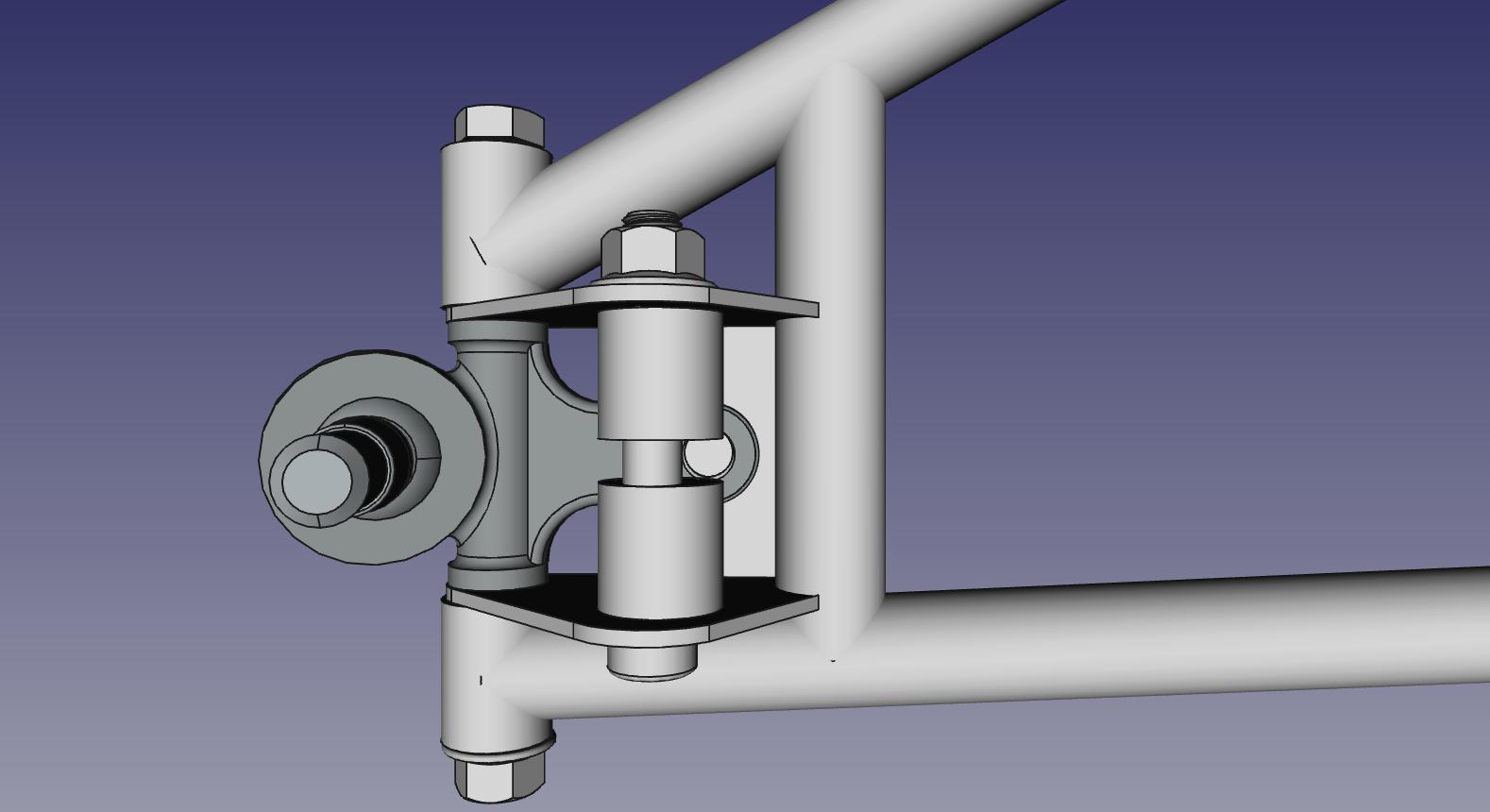 Interestingly, due to the design if the attachment to the ball joint (the long bolt) it ends up with the the front tube angled slightly forward by 2.5' giving the lower wishbone a rather jaunty design. While it's still not the prettiest design (Hey, I have to look in the mirror every morning!) I think it certainly ticks the boxes on strength and good failure resistance.

It also looks to be a very strong design too. Nice one.
Top

Aha! The Versace of Suspension Design has spoken! I must be on good ground then! Now to bolt it onto the rest of the model ... which should take about 6 weeks as my work schedule has just gone berserk. Will be crossing the Atlantic four times in the next three weeks ... and they say International Travel is glamorous! Hah!

Sorry to hear about the upcoming hiatus in progress, nowt more frustrating once you get into a task is there. Shame you can't trade air miles for rod ends.

If I could swap air-miles for joints I'd have a bloody garage full of them! Sadly the bloody things are pretty much useless and besides, the prize for doing lots of flying is ..... more flying! Er ... no. And guess what, I'm booked on BA today so it doesn't look like I'm going anywhere at all.

As they always say ... if you really wnat something screwed up, get a computer to do it!

All right! Couple of days off and despite the outrageous Phoenix summer heat we're off to the garage ... to do battle with the roll cage.

I want to know who was the SOB who came up with the roll cage design?!?!?!?

Sorry Kurt! Only joking but given my limited fabrication skills the "cross-bars" have been giving me nightmares as far as getting them cut right. It was hard enough placing them on the CAD model but in reality it was even harder!

However, I learned/came up with a couple of ideas that may help folks, assuming of course that they're deviating from the book. I'm sure if you stick to the book it's a lot easier, but once you start deviating all sorts of 3D hell start unleashing itself.

First off - scaffolding.... seriously. I learned very quickly that if you want your tubes to stay still for more than five mins you really need to build a scaffolding that the tubes can wrap round and be supported by. Took some time but back to the CAD model to design a scaffolding that would (a) support the tubes and (b) act as a reference to place them. 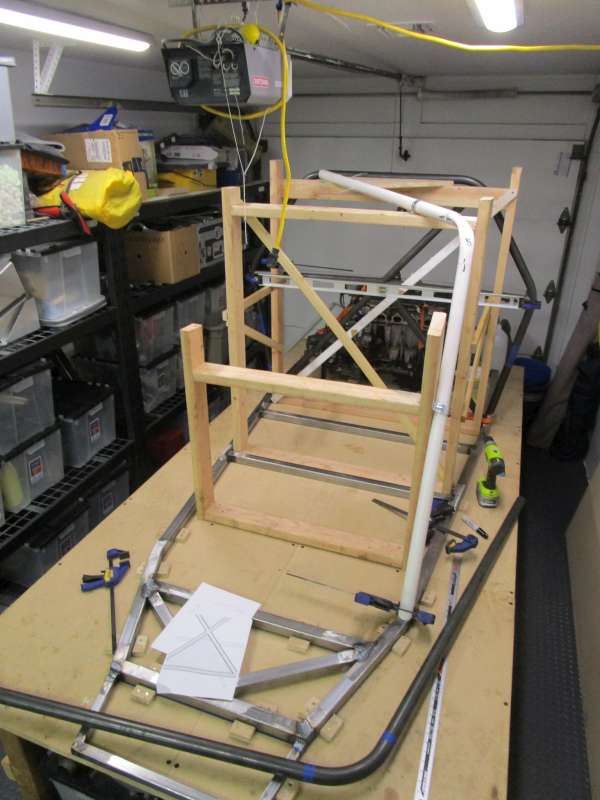 The real key to the scaffold working was the small triangular piece at the top which provided guidance for the angle of the top of the cross-bars. At first I didn't have this but once I added that life became much easier. This meant that every time I moved the bar I could always return it to a defined reference point which took a lot of the guess work out.

Secondly - do it in PVC first, but there's a trick. While I tried modelling the bars in PVC a while back it didn't really help any as I was still just hacking and guessing. There was no methodology or repeat-ability, which of course was what was required. The answer to this problem was an articulated cross bar. 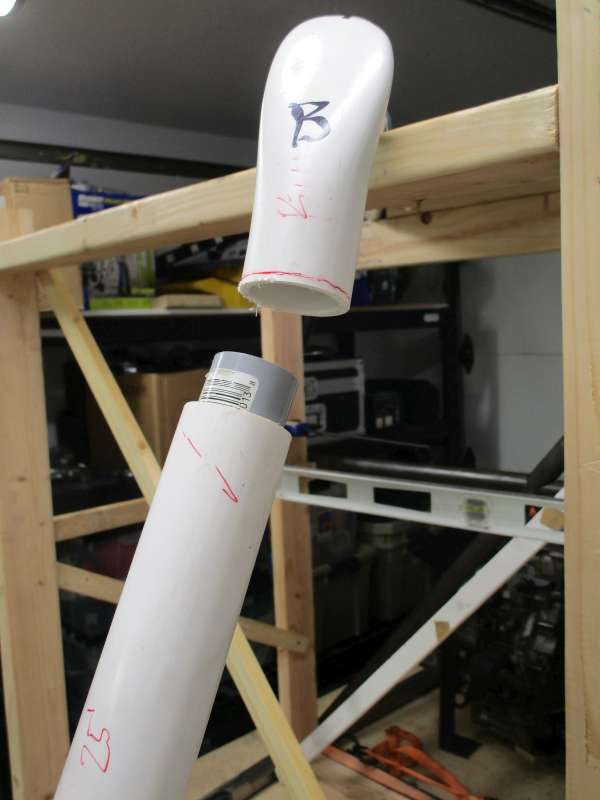 Instead if trying to form the bar out of one piece of PVC I created the bend and then the two "legs" separately, then used couplings to join them but allow them to rotate. This allowed for much finer control and by making small changes in the lengths and angles of the legs I finally nailed the right lengths. 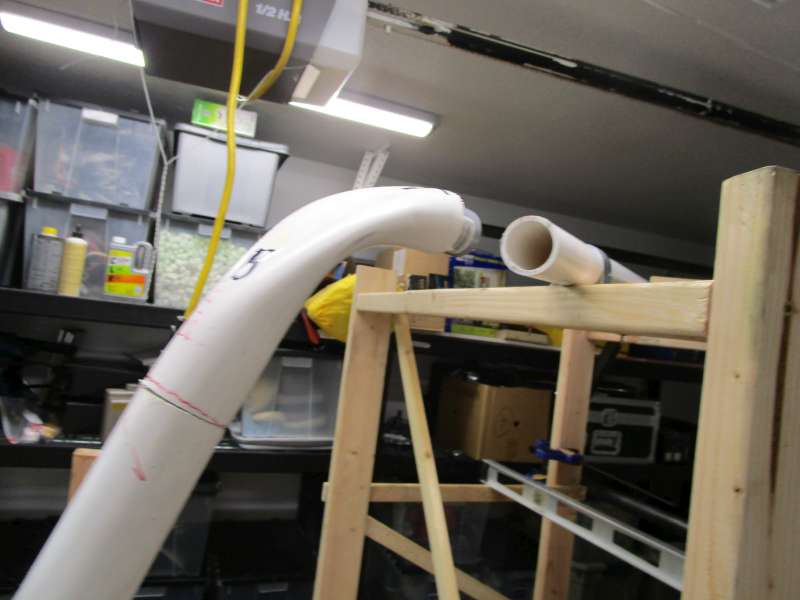 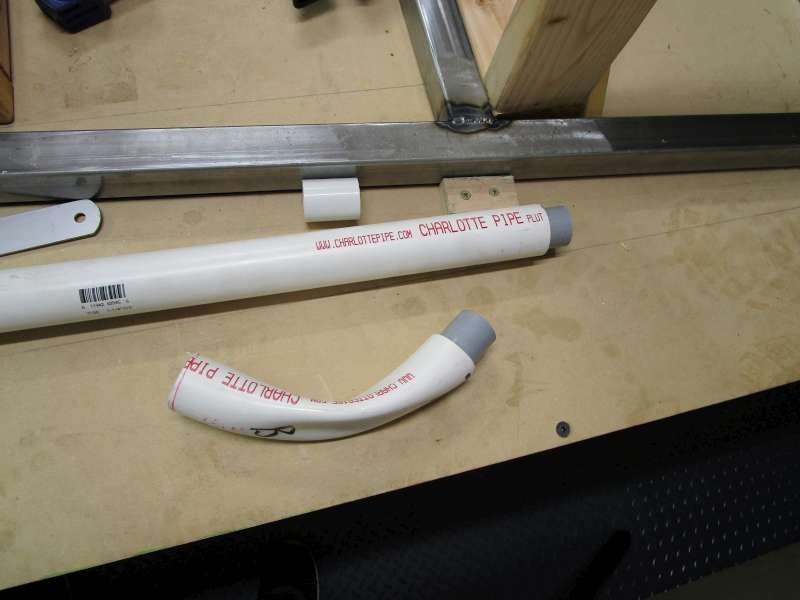 This gave me a pretty accurate PVC model that I could then transfer to steel with a pretty high level of confidence. Done the cut where it joins to the chassis floor on the drivers side and nailed it! Much relief!!!! But after a long day in 100'+ that was it for me. We'll make the final test tomorrow when we cut the notch to attach to the roll hoop and see how it all fits.
Top
Post Reply
224 posts