A friend of mine who tracks a Miata (with aero) was hitting ~172mph at ACS with around ~350whp... this tells me Midlana is pretty draggy, though not Locost draggy.
Bill J
Top

I'll post pics but keep in mind that F1 cars have a drag coefficient of something like 1.0 or more. Teams found out that the fastest lap times came from setups with a lot of down force, which meant that going faster through turns gave an overview faster lap than being faster on the straights.
Top

Midlana1 wrote:I'll post pics but keep in mind that F1 cars have a drag coefficient of something like 1.0 or more. Teams found out that the fastest lap times came from setups with a lot of down force, which meant that going faster through turns gave an overview faster lap than being faster on the straights.

Agreed Kurt, corner speed definitely has a direct correlation with terminal speed on the straight. In the Miata example above, they were using one of the end banks leading onto one straight stretch then down into the infield to make a road course (maybe a standard config for ACS, I haven't been there personally). Friend said he was pedaling a little to stay off the rev limiter at the end of the banking and all the way down the straight.

If you were running in a similar track configuration, what was your speed on the banking vs the straight?
Bill J
Top

I ran there and as mentioned, top speed was 150 or so, probably closer to 160 now. Real men go through turn one (banked) at 130. I do not because of the consequence of the back coming around scares me. That said, with wings my top speed would probably drop to 145 or so but then the turn could probably be taken without lifting. Now whether I could do that remains to be seen. My brother and I have been discussing wing NACA wing shapes so that'll happen eventually.
Top

If you'd like to muse on the forum, I can probably help out a bit. I've got a bit of wind tunnel testing time under my belt, and still remember a bit of aerodynamics even though it's not used much in my current day job.


I don't think I'd go with a NACA profile for low Reynolds number usage. There's much better stuff out there.
Top

Such as? We're looking for a shape that starts working at around 60 mph (lower is better of course) and both of us are willing to give up top speed (me especially since 5th and 6th can't handle the torque anyway so I'm limited to around 140mph).
Top

It's not really a question of a speed you want it to start working - the wing will always be working, and downforce will go up with the square of the speed.

That said, some airfoil profiles are better suited to the Reynolds numbers you see on a car, which in the airfoil world are all considered "low." Going off memory, you're probably going to see about 300,000-1,000,000 Re at typical speeds you see on a track car with a reasonably sized airfoil.

The main problem with a rear wing on a Locost, and to a lesser extent a Midlana is getting relatively clean airflow to it. I can't imagine anything much below the top of a windshield on a Locost will give good results. On a Midlana, you might be able to get by with something a bit lower due to the more raked windshield and longer distance between the windshield and rear end. Also, you might want to think about a large adjustable spoiler below the wing to trim the balance some as well and enhance your diffuser expansion. Spyder prototypes of the mid-late 70's found that was sometimes much more effective than a wing back there due to them having pretty separated airflow back there.

The GE-222 you can find in aluminum extrusions which would make fabrication much easier. The only problem is the chord is a bit short for our usage. It'd be better if it were about 25-35% longer since I think they're primarily used for wind turbines so ~6-7" chord works well for them. We need more like 9-12" on the main element, and 3-4" on the secondary element.

You can also get foam CNC cut into an airfoil for pretty cheap to make a composite part, but again chord could be a problem since mostly RC guys do that and they like 4-6" chords usually.


The secondary element doesn't need to be heavily cambered as can be seen from this GT-1000 ARP wing: 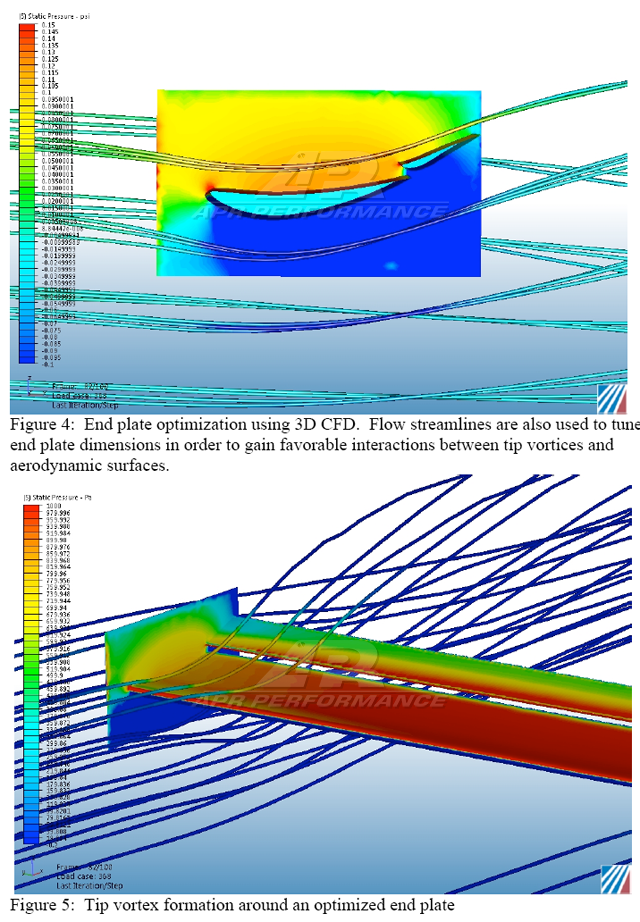 You want roughly a 3 mm gap, and a slight overlap of the elements of maybe 1-1.5 mm so that the low pressure peak of the secondary airfoil is right on the tailing edge of the main element.

Or you could buy a few cheap (~$70ish) eBay aluminum wings and cobble something together. They usually have pretty decent airfoils surprisingly, but it's hard to know what you're getting before you get it.


I was going to build in a front dual element, and probably rear dual element, maybe a rear spoiler on my build. I also need to post up some ideas to increase diffuser expansion/length. But the above should give you a good starting point.
Top

I still need to post pictures of the wing mounts...

Airflow won't be a problem. The front mounting points are on the front-most bulkhead with the front A-arm attachment points. At the rear, the mounts are at the top of the main roll hoop and at the bottom of the rear down tubes, so the rear wing will be high enough to get clean air from above the windscreen.
Top

Along these same lines - have you ever tried to estimate the Cd of your build Kurt?

Doing some "rough figurin'" - I was getting between 19-20 sq ft for frontal area, and small changes in Cd cause drastically different results above ~100 mph as the drag comes in.

It was so much so that it seemed trying to shave 10% drag was better than adding say 20 HP to a 300 HP car, since things were so drag dominated.
Top

I did figure Cd way back and... don't remember what it was. There's a straight-on picture of the car in the book and knowing that the total width is 72", you could get a pretty accurate idea of cross-section. I have one data point, that with ~340 hp or so I reached 149 mph. With another 100 hp it's obviously higher now.

Regarding dropping drag by 10%, I completely understand what you're saying but to be honest I don't feel very motivated to do so at this time. If I was to start down that road I'd probably go to the extreme and come up with a completely enveloping shell for the entire car, but then I'm right back to having the problem mentioned elsewhere, that I'm already limited to 140 mph due to the weak OEM 5th and 6th gears, so suddenly being able to go 170 mph is pointless with this drivetrain.
You do not have the required permissions to view the files attached to this post.
Top
Post Reply
61 posts