How much power is "enough?"

How much power is "enough?"

A little backstory, I have a ~2400-2500 lb S13 240SX with a 2L SR20DET engine. It's been run in various states of power from about 200-400 rwhp. It has moderate aero (splitter, 69" rear wing), and the biggest thing I've noticed at track events is that the power to weight ratio is very good compared to a lot of other vehicles, but once you hit a straight, the aero drag takes away "a bunch" of power, and all of a sudden the "leftover power" to weight ratio isn't good compared to other high HP, heavier vehicles.

A Midlana is probably going to be pretty draggy even without aero downforce, so this is doubly a problem.


So I'll leave it as an open question - how much HP do you feel is enough to provide at least as much top end thrust (>110-120 mph) as modern high HP street cars?

Re: How much power is "enough?"

When I ran Midlana at AutoClub Speedway (a NASCAR track) with the previous engine and smaller turbo, I hit 149 mph down the front straight. How much power that engine generated depended how it was measured; a hub-mounted DynoPack claimed 430 (I may be off a bit, it's been a while) or so while an inertial in-ground drum-type claimed about 350 (from real-world testing, this number appeared to be more correct).

With the new engine and turbo, on E85, it's now 530/430 depending how it's measured, so the math says I can expect around 158 mph (though see below). For comparison, my brother's LS3-powered Stalker is vaguely the same shape, has 430 hp, and reaches 160 on the same straight.

As an aside, what sucks is realizing all the above doesn't mean much in my case because my OEM overdrive gears can't handle the power.

Re: How much power is "enough?"

Yea, making the power is easy these days with nice engine management being relatively affordable and accessible compared to say, 20 years ago.

The next problem is making the drivetrain hold up to the abuse, and in the case of pretty much all FWD transmissions, they're going to really not be too happy at higher power/torque. For the VQ35DE 6 speed, it seems like some claim it's as low as 350-400 wtq, which would not be much for a turbo setup on a 3.5L.

Do you have any real aero on your car like front and rear wings?

It won't be near as fast as a turbo K24, but this is what I'm thinking might be "serviceable" out there on track: 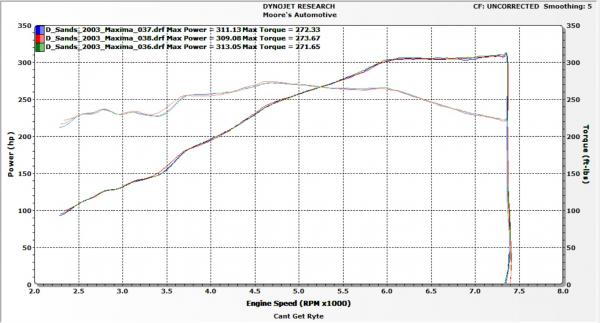 But I'd hate to add a bunch of aero drag then start thinking the car is too slow to really "scare me" when I bury my foot into it. My S13 will soon put down around 400-450 rwhp on track, and I'll know better then if that's up to the level to really get the blood pumping.
Top
Post Reply
3 posts • Page 1 of 1